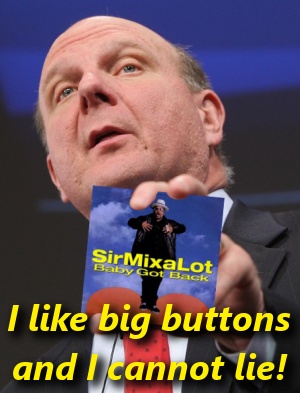 Ballmer, you disappoint me again. Yes, you know how to crush competition. No, you don’t know your product or technology the way your predecessor does, as exemplified by you saying that touch optimization means “big buttons.” Yeah, because everyone raves about the iPad having big buttons.

Attending a briefing with the Big Ballmer, blogger and IT specialist Mark Wilson passes along this transcription of Big B’s response to a question about touch-enabled Windows 7 (hat tip to Mary-Jo Foley at ZDNet):

Yeah, what you’ll see over the course of the next year is us doing more and more work with our hardware partners creating hardware-software optimisations with Windows 7 and with Windows 7 Media Center […] Media Center is big and, when people say ‘hey, we could optimise more for clients’ I think what they generally mean is ‘Big Buttons’. Big Buttons that’s, I think, a codeword for Big Buttons and Media Center is Big Buttons not Little Buttons. I’m not trying to trivialise that – it’s a real issue.

Yes, it is a real issue. No, “big buttons” is not the solution. (And yes, I think of something else when I hear “big buttons.”)

The problem with touch on Windows 7, and I continue to disagree with Brett on this, is that it reads round finger presses as pinpoint cursor clicks. When your finger touches an area, Windows reads it as a tiny cursor click. That unavoidably leads to accuracy problems

By contrast, iOS, Android, webOS, and every other touch-optimized OS reads finger presses as circular areas, more comparable to your actual fingertip surface. That’s why even my fat fingers can manipulate things on those tiny screens. When my finger engulfs a button, it registers as me pressing that button, just like a physical button. By contrast, on a Windows touchscreen PC, that same situation could register the touch outside the button. Hence, making buttons bigger than fingertips could address this symptom, but it doesn’t fix the underlying problem. Furthermore, you can’t “big button” the Internet.

The real headshaker here is Ballmer actually says he thinks big buttons equals touch optimization. People can zip through standard web pages with tiny text links on handheld devices. How does he look at them using their fingers on those small screens and think the answer is big buttons? That approach works for application launchers, but once you get into an application, then what happens? You can’t “big button” every Windows application.

He’s not helping himself with the comparison to Windows Media Center either. WMC is based on a ten-foot interface. It’s supposed to be manipulated from a distance. It’s designed to work with a button-filled TV-like remote control. By contrast, touch is up-close and free of hard buttons. Granted, they have a lot of UI elements in common, but that’s due to a shared focus on simplicity. On the surface, they look similar, but the design intentions are actually quite opposed.

I do use a Wacom Graphire pen tablet to control my Windows Media Center PC, and I’ve noted how WMC can be more touch-friendly. However, my ideas are based on using multi-touch gestures, not buttons. Slide two fingers up or down anywhere for volume control. Two-finger swipe right or left to skip forward and back, and swipe-and-hold for extended skip. No buttons, just gestures. WMC has good touch control, and it could be great, but big buttons are not a part of that.

Ballmer did say one thing to give me hope:

We’re doing work with the OEMs to make sure that they treat ink also as a first class citizen.

Yep, in a surprise to me, Ballmer has not forgotten about ink and says they’re working to make sure it does not get overlooked in the stampede towards touch. At least on the OEM side. No mention of what they’ll do to raise it from second-class status in Windows. Personally, I use ink to make a lot of buttons, big or small, unnecessary (which is why my tablet interface is mostly icon-free thanks to ritePen).