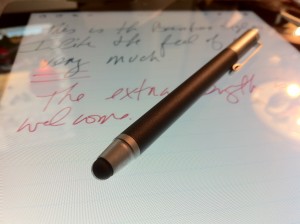 Over the weekend I posted about Bamboo Paper, an Inking and doodling App for the iPad, that Wacom is marketing along side its Bamboo Stylus for the iPad. I had recently ordered a Bamboo Stylus and it came in this morning. I like what I see and feel.

I’ve used and tested quite a few styli for the iPad and the Bamboo Stylus has the best feel of any that I’ve experimented with. The stylus I’ve been using most often was the BoxWave stylus (which you can find under any number of names or brands). What I like about the Bamboo Stylus is that it is a longer and feels more natural in the hand than the shorter BoxWave. It also feels easier to manipulate than two other styli I’ve used alot, the HardCandy Stylus or the PogoSketch.

I’ve done some Inking this morning in Penultimate, Noteshelf, and of course Bamboo Paper and the Bamboo stylus works very well in each. In fact it exposes the same flaws that other styli expose in each of those Apps. That said, it also lays down Ink very smoothly.

In the days of paper, pen, and ink I know that many folks searched until the found the perfect writing implement measuring both the fell of the implement in their hand and how it felt laying ink down on a page. It’s really no different in the age of Digital Inking. How a stylus feels in the hand is a key factor in the Inking experience, and I’ll say after just a morning of Inking with the Bamboo Stylus, that Wacom got that aspect just right. There’s been some thinking about how the Bamboo Stylus is weighted and the materials chosen, and that is apparent. It doesn’t feel cheap or plastic. It feels like, well a writing implement that might be used for serious work or play.

The Bamboo Stylus like most of the others on the market (except the PogoSketch and some other special styli aimed at the artist market) have the same rubbery feeling capacitive tip. Perhaps its the size but the tip on the Bamboo Stylus doesn’t seem to give in the way that they do on other styli. That’s a good thing. Keep in mind though that how a pen or stylus fits in your hand is a very personal thing. Your hands, mits, paws, whatever might give you a different experience.

You can pick up the Bamboo Stylus[amazon_link id=”B004VM0SE6″ target=”_blank” container=”” container_class=”” ] from Amazon for $32.96 [/amazon_link]from another vendor. Amazon itself lists it as being $29.95 but not being available for a month or two. Of course you can also order from Wacom directly for $29.95. 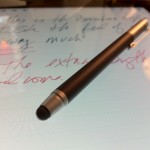 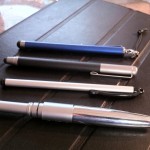 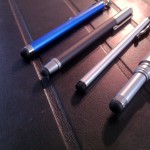 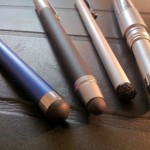