Select customers of Bank of America with BlackBerry devices are now being invited by the bank to trial a new digital wallet mobile payment program powered by Near Field Communication (NFC) chips. Invites are going out to some lucky customers of the bank, and if they elect to participate in the trial program, they will receive a new back battery cover that’s NFC-capable along with a microSD memory card. 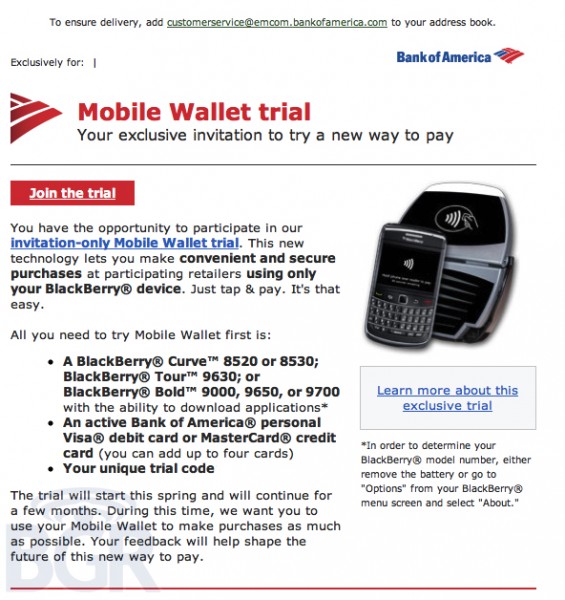 The Bank of America program is expected to be active this Spring; an official date was not given. Users will need either a Visa debit card or a Mastercard credit card through Bank of America, and payments will be accepted anywhere Mastercard PayPass is accepted, according to sources of BGR.

RIM has publicly acknowledged that it will be embedding NFC chips into future BlackBerry models, though the BlackBerry-maker did not give a timeline to when that would happen. Recent leaks of new GSM and CDMA BlackBerry models that are forthcoming reveal RIM’s aggressive plans into the mobile payment market, which would allow users to use their BlackBerry smartphones to pay for physical goods.

Other makers such as Apple, Nokia, Google with Android, and others are expected to tackle this emerging mobile payment market in the near future for the U.S. market.

With NFC-equipped phones, users can begin integrating their physical wallets with their smartphones. With businesses and merchants having compatible NFC readers, users just need to wave their phones in front of the readers to pay for physical goods as the NFC RFID chips would get read that way, rather than having to swipe a physical credit card. Various cellphone-makers, carriers, financial institutions and banks, and digital commerce transaction managers like PayPal are all interested in the technology as a potential source of revenue.

The most recent embedded NFC solution inside a smartphone without requiring a memory card, replacement battery cover, or any other adapter is in Google’s Nexus S, an Android smartphone made by Samsung.

While there are other uses as well for NFC technology, mobile payment is getting a lot of attention right now as it provides a tangible, economic benefit to hardware-makers and banks. In the past, Nokia has used RFID NFC chips to track clean water in Haiti after the earthquake. The company granted researchers RFID-enabled Nokia phones so that they can monitor filtering supplies for clean water to ensure locals are changing the filters through routine tagging. The technology and the disaster relief efforts were discussed in Silicon Valley at Nokia’s new Sunnyvale, California office as part of the company’s Nokia Musings talk series, of which the topic of discussion was the intersection of technology and humanity.

Other uses for the technology stem from Apple in coupling smartphones and tablets with desktops through NFC technology, in which user settings, programs, and configurations can automatically be saved onto a nearby iPhone. An Apple patent reveals that Apple could leverage NFC technology so that iPhone users can access another Mac computer–one that is not their own–and still have all their settings and select programs and configurations pre-loaded via the stored information on their NFC-equipped iPhone so that their desktop would resemble their home Mac. While Apple had patented the use of NFC in this particular application, it is unclear whether the Mac-maker will release a commercial solution to consumers in the form described by the patent.

Via: Engadget via BGR