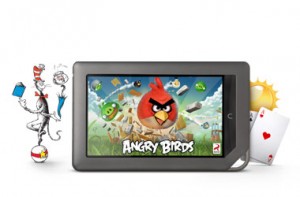 Barnes & Noble had announced that in just over a week, users of the Android-based Nook Color reading tablet had downloaded over a million apps. The $250 tablet is seen as one of the best selling Android tablet for its sleek design and affordable price. When the Nook was originally released, it debuted on the more limited Android 2.1 OS, and at the time Barnes & Noble had promised an update to Android 2.2 to bring support for Adobe Flash as well as third-party apps.

Just one week after the company made its free software update featuring popular NOOK Apps available over the air for all NOOK Color customers, customers have made more than one million apps downloads. NOOK Color customers are enjoying access to a variety of popular NOOK Apps and downloading a selection of both paid and free apps that get even more out of their Reader’s Tablet, and have given the top 10 paid and free NOOK Apps the highest 4 or 5 star rating.

The tablet straddles the line between dedicated e-reader and open Android tablet. Perhaps, Barnes & Noble is ushering an era of “smart e-readers.” As an experience, the Nook Color is still very much a curated experience designed to center around the Barnes & Noble e-reading experience with a streamlined UI that hides a lot of Android’s geekiness. However, despite the recent ability to support third-party apps, those apps aren’t delivered through the traditional Android Market app store. Rather, Barnes & Noble is even curating its own Nook Apps storefront.

Given its low price point, the Nook Color is a popular tablet with hackers. Some have managed to root the device and install even newer versions of the Android OS and prior to the update to deliver third-party app support, some enterprising developers have managed to even install Android Market on their devices.

The company is expected to launch a new product on May 24th, and a Nook Color 3G version may be the result. Rival Amazon is mulling plans to launch its own Android-based tablet(s) as well. Despite the recent lack of success of Android tablets, Amazon may have the scale to deliver a low-cost solution to compete on price with the iPad.