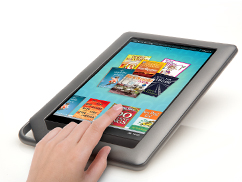 The year was 2010. The eReader wars had heated up to boiling. e-ink devices were deployed by numerous factions, big and small. Everyone expected Amazon to be the one to up the ante, but they weren’t. Barnes & Noble launched first. The war changed that day – everything changed – that day when they went NOOKcolor.

So anyway, B&N announced their all-color LCD version of the NOOK yesterday. The NOOKcolor, which is spelled all-caps in text but in all lowercase in the logo, is basically their NOOK with a fullscreen color LCD instead of the split e-ink/LCD screen. The larger backlit LCD cuts into battery life, clipping it to eight hours, but the ability to read everything in color will be worth it to many.

The VividView touchscreen displays 16 million colors. IPS technology allows for a wide viewing angle of 178°, just like the iPad, but at higher 1024 x 600 resolution for 169 PPI on its 7-inch display. The accelerometer allows instant switching between portrait and landscape orientation. The screen also includes glare reduction. Won’t be as easy to read in direct light as e-ink, but again, you get color. Plus, web browsing via Wi-Fi (free in-store access) and a media player that supports MP4 video (and MP3 & AAC audio) just looks better on an LCD.

All that new stuff is on top of the existing NOOK features of in-store book browsing, lending to other NOOK users via LendMe, and access to millions of books, newspapers, and magazines. Not sure how customizable the OS is, but it’s Android-based, so I’m sure you can root it to do anything. Price is $249. Ships November 19.