The biggest news out of Barnes & Noble’s new Nook HD 7-inch and Nook HD+ 9-inch tablet is not that the devices now support HD resolutions and are among the more affordable HD slates on the market based on Google’s Android OS, but that Barnes & Noble, like rival Amazon, has added some custom software to the Nook to make them unique. One of those customizations is the ability to have different user profiles so that the e-reading-centric tablets can be passed around and used by multiple members of the family or office.

Similar to how desktop users can log in to see their own programs, settings, and documents, Barnes & Noble is highlighting the Nook Profiles as a way for users to manage their content and create child-friendly tablets when sharing the same hardware.

New NOOK ProfilesTM instantly transform the device in hand to any family member’s very own tablet. With a quick tap on a profile at the top of the screen, the entire experience magically changes into that family member’s personal tablet as their own content – and personalized recommendations – appear on the display. Now mom’s NOOK becomes Billy’s NOOK, becomes dad’s NOOK and so on.

Here’s how the hardware stacks up: 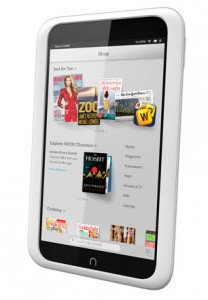 The Nook HD will feature an impressively high 1440 X 900-pixel resolution, boasting up to 25 percent more pixels than the rival Kindle Fire HD slate. The device will feature an IPS LCD display with optical bonding technology for low glare. The device is said to be 20 percent lighter than the Kindle Fire HD, is ergonomically designed, and the design of the slate closely resembles that of the Nook Simple Touch e-ink readers, which marks a departure from the design of the Nook Tablets before it.

The Nook HD features a dual-core 1.3 GHz CPU and is available in either Snow or Smoke colors. It will come with either 8 GB of internal storage for $199 or with 16 GB for $229. The device will have a micro SD card slot for additional memory.

The 7-inch slate will compete in the same space as the Amazon Kindle Fire HD and the Google Nexus 7. 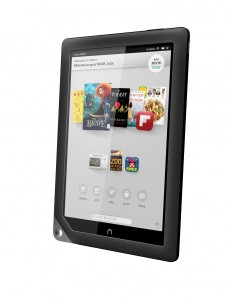 The Nook HD+ will feature a slightly larger 9-inch display. The display is a 1080p HD resolution display with 1920 X 1280 pixels. The slate will be able to display videos natively pixel-for-pixel in 1080p on the device. Additionally, users can connect an HDMI cable to mirror video content to a larger HDTV to share the video experience.

The Nook HD+, unlike the HD edition, retains the Nook Tablet design aesthetics and will be featured in a Slate color for $269 for a 16 GB edition and $299 for 32 GB.

Both tablets will be available in October. Pre-orders start now.

To make use of the new increased HD resolution on both tablet, Barnes & Noble is also introducing its Nook Video service which will allow customers to stream and download movies. Purchase content can be synced to the Nook Cloud so you can pick up where you left off on a new device.

Launching concurrently with the shipment of the new products in late October, NOOK Video offers customers their favorite standard and HD movies and TV shows for streaming and download to enjoy in spectacular color and stunning definition on NOOK HD and NOOK HD+. From major studios, networks and companies like HBO®, STARZ, The Walt Disney Studios and Warner Brothers Entertainment, the NOOK Video catalog offers something for everyone in the family to enjoy. Customers will find TV favorites such as Game of Thrones®, Breaking Bad and The Walking Dead to movie favorites like Disney-Pixar’s Brave, The Dark Knight and Harry Potter movies. Both devices are designed with an HDMI compatible port to allow customers to easily connect to their TVs to watch movies and shows in up to full 1080p. Videos streamed and downloaded from the NOOK Store are stored safely and securely in the NOOK CloudTM, so NOOK Video content can also be viewed on NOOK devices, TVs, smartphones and tablets via a suite of new free NOOK Video apps.