Barnes & Noble has revealed the second-generation Nook Simple Touch with GlowLight, only this time around, the company is just calling it the GlowLight. It improves on the first-generation e-reader by being both lighter and brighter for better reading, as well as improvements being made to the display with faster response times.

Just looking at the exterior, the GlowLight has changed drastically, now sporting a gray and white shell instead of the black body, as well as an overall rounder shape this time around. Perhaps one of the most impressive changes to the GlowLight is that the display no longer does those annoying page flashes every time you turn a page in reading mode. The more image-heavy pages will still include some page flash, but reading through walls of text won’t include any of that. 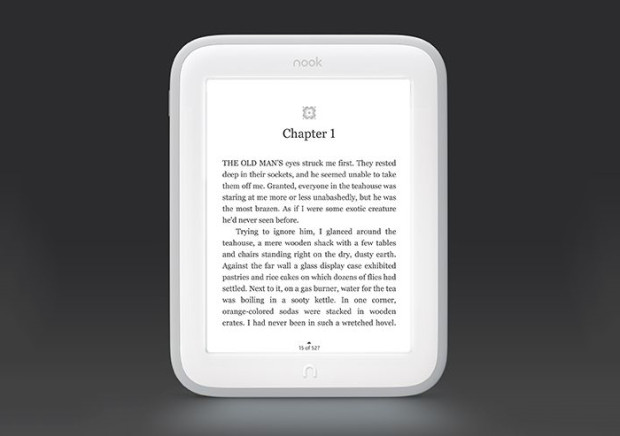 The display is also higher resolution (1024×758), making it Barnes & Noble’s highest-resolution screen ever, coming with 60% more pixels than before, and as the name of the device would suggest, it comes with improved GlowLight technology, which illuminates the screen more evenly than before. If you’re not familiar with the Nook’s GlowLight tech, it’s essentially the opposite of a backlit display, where a reading light on steroids is placed at the top of the display and shines down across it to illuminate the tablet.

Even with the light tech, Barnes & Noble boasts that the GlowLight can last up to 8 weeks before needing a recharge. This is based on testing with 30 minutes of reading per day and 1 page refresh per minute, as well as being on default brightness with WiFi off. Obviously, your own results will certainly vary, and we’re looking forward to seeing what real-world usage is like.

The GlowLight also comes with 4GB of storage, and according to B&N, that’s enough to store about 2,000 books, which is probably more than enough to store your entire library on. One thing’s for sure, though. Barnes & Noble is going after Amazon, undercutting prices of the Kindle lineup by offering this new GlowLight for just $119, pretty much making it an impulse purchase for anyone who’s a book nut. The e-reader is available now to order online or in-store.