Barnes & Noble’s NOOK e-readers and tablets haven’t attracted much in the way of attention since debuting as would-be Kindle rivals a few years back. However, that could change thanks to some very steep Cyber Monday price cuts.

For starters, the company is still promoting the discount it’s offered possible Nook Simple Touch buyers since early this year. Users can pick up the touchscreen-equipped e-reader for just $39. That pricing doesn’t include a rebate or any of the other customary sale tricks that retailers sometime use. 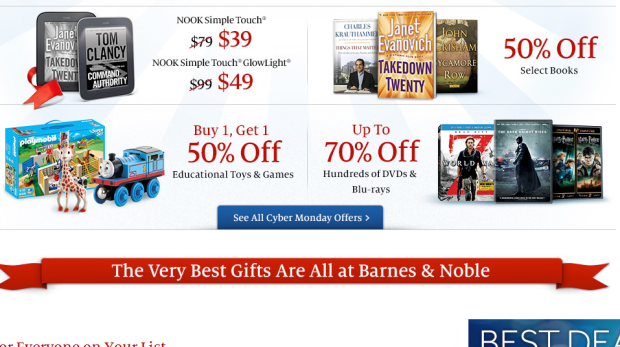 The book seller is discounting some of the content in its digital store so that users have something to break in their new Nook e-reader with too. It’s marking down “best-selling fan-favorites” like The Color Purple by as much as 80%. Users who prefer comics can also save. The company has also marked down 52 of DC Comics’ comic books to just $4.99 each.

Although it isn’t offering users discounts on its Nook tablets, the company has marked down its tablet-related accessories. Users looking for a cover for their Nook HD can order one for their tablet for just $25. The company has also slashed prices for the NOOK HD Power Kit and HDTV Adapter Kit accessories.

Unfortunately, as the name suggests, users don’t haves the option to redeem any of these offers in stores. Users will need to place their orders through Barnes and Noble’s website and they’ll need to do so today.

Barnes and Noble isn’t leaving physical media lovers out in the cold. Its website is also offering books, educational toys, DVD and Blu-ray-based movies and television shows for as much as 70% off. Those deals are also only available on its website. Users who spend $75 or more online or in store will receive a gift card for $10. That gift card won’t appear until December 26th. A special coupon code also grants users an additional 25% off anything excluding Nook devices and accessories online.

Though Barnes & Noble’s decision to not offer discounts on its line of tablets is discouraging, the Simple Touch GlowLight would make an excellent gift for users who like to read and already have a smartphone.