Barnes & Noble CEO confessed that the near field communications (NFC) radio will start making an appearance on the company’s future Nook tablet and e-readers, but did not give a definitive timeline on when that would happen. News of the NFC on the Nook follows the company’s announcement earlier this week that Microsoft had made a $605 million strategic investment in Barnes & Noble’s e-book and college textbook business, a market that Microsoft had initially invested heavily in through its Microsoft Reader app many years ago but had fallen to the wayside while Amazon, Sony, Barnes & Noble, and Apple are now making large investments in recently. 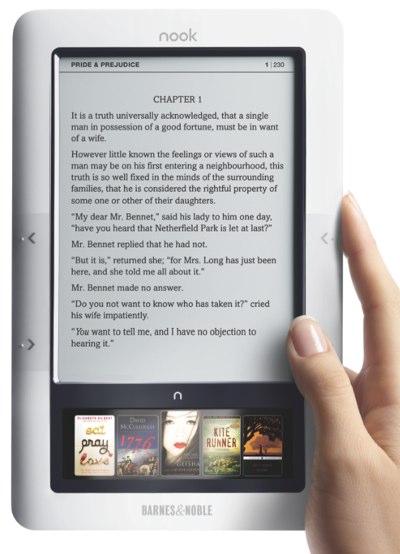 Fortunately, NFC on the Nook won’t be used for digital wallet mechanisms and will be centered on making your reading life more integrated between Barnes & Noble’s retail footprint and its online catalogs.

According to Barnes & Noble, integrating NFC into the Nook will help the company leverage its digital offerings and its physical retail presence, which is something that its largest competitor Amazon does not have. CEO William Lynch says, “We feel like we still have a lot of opportunity in the offline-online integration, and how we integrate stores.” Barnes & Noble realizes that once people become a Nook customer, they still consume print books and the whole purpose of NFC is to make it simpler to manage digital and non-digital life:

We’re going to start embedding NFC chips into our Nooks. We can work with the publishers so they would ship a copy of each hardcover with an NFC chip embedded with all the editorial reviews they can get on BN.com. And if you had your Nook, you can walk up to any of our pictures, any our aisles, any of our bestseller lists, and just touch the book, and get information on that physical book on your Nook and have some frictionless purchase experience. That’s coming, and we could lead in that area.

To learn more about Barnes & Noble’s venture into NFC and Lynch’s insights into technology, you can visit CNN Fortune for more details.