For users who are not pleased with Netflix, Amazon video-on-demand and Prime streaming services, and Google Play store, Android tablet-maker Barnes & Noble will be introducing its own video service for Nook tablets starting this fall. Dubbed Nook Video, the storefront will feature “blockbuster movies, classic films and original TV shows from major studios including HBO, Sony Pictures Home Entertainment, STARZ, Viacom and Warner Bros. Entertainment, plus favorite movies from The Walt Disney Studios.” 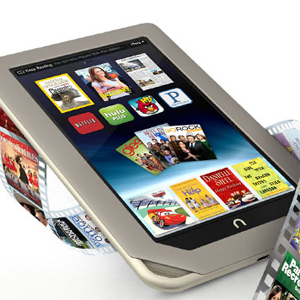 Beginning this fall in the US and coming this holiday season to the UK, NOOK Video will offer customers the opportunity to shop an extensive and diverse digital collection of standard and high-definition movies and TV shows available for streaming and download. Through deals with these and other major studios, the NOOK Video catalog will offer something for everyone in the family to enjoy, including Disney-Pixar’sBrave and Toy Story 3, Marvel’s The Avengers, 21 Jump Street, Awkward, The Artist,Breaking Bad, Dora the Explorer, The Daily Show with Jon Stewart, Spartacus, Magic City, The Walking Dead, True Blood®, Game of Thrones®, Harry Potter movies, The Dark Knight, The Hangover and many more.

Barnes & Noble hasn’t detailed pricing for the direct a la carte download and streaming prices. From the press release, it appears that the service will mainly be an a la carte download service rather than a streaming subscription service akin to Netflix, though that’s not entirely clear.

The company will also allow customers to store digital media purchases on the cloud. Through Nook Cloud, users can re-download content that they own. Additionally, if customers purchase content on physical media–like a DVD or Bluray title–with an UltraViolet download code, that code will also work with Nook Video.

And unlike Amazon’s video service for that company’s Kindle tablets, Barnes & Noble is looking to bring its service to other devices through a Nook Video app. Barnes & Noble currently makes its Nook e-book reading app available for Android and iOS users so the Nook Video app may also hit those platforms, allowing non-Nook hardware to tap into the video streaming service.

As with the NOOK Reading apps, NOOK Video apps will seamlessly work together so customers can pick up watching right where they left off on any of their connected devices.