Batman Arkham Knight reviews already point at a great game and our hands on time with the game left us excited and wanting more.

The good news in this mess is that most retailers are taking care of customers with a free digital version of the game, so that the Batman Arkham Knight release date arrives on time even if the Limited Edition arrives very late. 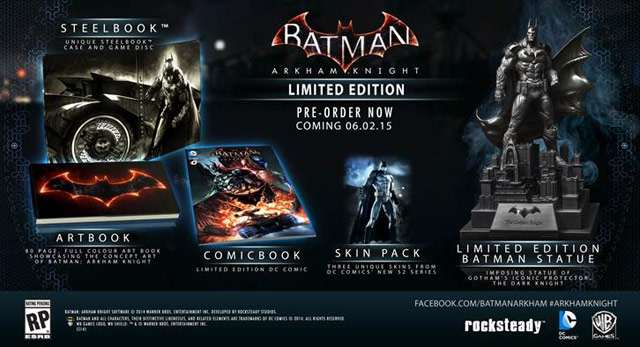 We are still trying to ascertain if this is a regional problem, or if it impacts all the Batman Arkham Knight Limited Edition models across the world.

Videogamer shares an email from Amazon to a customer about the delay that is due to a packaging problem.

“We wanted to let you know that Batman Arkham Knight – Amazon.co.uk Exclusive Limited Edition (Xbox One), from your order will be delayed as the manufacturer has advised us that there’s been a packaging quality issue.”

The email also arrived in the inboxes of PS4 customers from Amazon. If you ordered the Batman Arkham Knight Limited Edition you should check your email for an update about your order.

Amazon notifies the customers that orders will arrive before July 14th with “updated packaging.” To make up for the issue Amazon is sending out a digital download code for the game to users who are impacted by the delay.

Users who are waiting for the delayed version should check for a download code, and if it is available enter it early to pre-load the game. Otherwise gamers will face a short delay while they wait for the game to download to their console. This process takes longer than simply popping the disc in to install the game. The time depends on the speed of your internet connection.

The publisher cancelled the Batman Arkham Knight Batmobile Edition due to the poor quality of the Batmobile included with the game, leaving this as the only special edition.

Despite the issues with special editions, the Batman Arkham Knight release date is still going forward as planned with special midnight release parties at GameStop and the option to play at 9 PM Pacific tonight for some digital versions which will unlock at 12:01 AM Eastern across the U.S.

The Batman Arkham Knight release date is still on for June 23rd and users can order a digital version on PSN and Xbox Live. The standard Batman Arkham Knight is still available to order at most stores. There are different character and DLC bonuses depending on where you order, so make sure you weigh the options before checking out.