BlackBerry Messaging or BBM for Android users is now in its testing stages.

The BoyGenuisReport was allegedly sent a screenshot of the application’s login screen itself. It depicts only the updated BlackBerry Messaging logo and options for signing in with, or creating a BlackBerry ID. It seems users need a BlackBerry ID to sign into the application regardless of the platform that they are using BBM on. 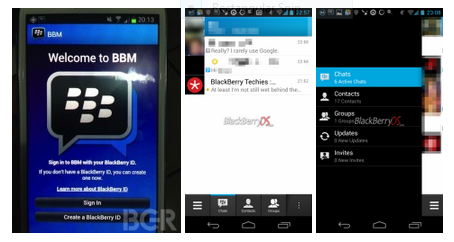 Pictures of BBM for Android sent to CrackBerry and AndroidCentral

While CrackBerry believes that both BBM for Android and BBM for iPhone are now in the last stages of testing, so far, there haven’t been any reports or screenshots of BBM for iOS.

BlackBerry announced that it would bring its messaging service to iOS and Android devices at this year’s BlackBerry Live event. Using the free application, users will be able to group chat with as much as 30 people and share text messages, photos and voice messages between each other. At the time BlackBerry said that it would make both of the applications available for free to users sometime this summer.

Read: BlackBerry Will Bring BBM To iPhone and Android This Summer

By making BlackBerry Messaging available to users on other platforms, BlackBerry is hoping to make its messaging service the defacto-standard for all smartphone users. Should they succeed, it’s likely that the company is counting on the enhanced features that are only available on its devices, to attract users to their hardware ecosystem.

Unfortunately for BlackBerry, the competition for a cross-platform BBM messaging service has only become more entrenched since BlackBerry made its announcement back in May. Although Apple’s iMessages is still exclusive to the company’s products, Google and Microsoft have both made even larger bids to conquer messaging with revamped versions of Skype and Google+ Hangouts.