If the arrival of landing page on BlackBerry’s company website is can be used an accurate indication of things to come, the launch of BBM or BlackBerry Messaging for Android and iOS could be near.

A special page for the upcoming applications arrived earlier today. Unfortunately, the landing page doesn’t actually offer any more details about the iOS and Android variants of the application. Instead it only asks users to submit their email address so that BlackBerry can provide them with an email notification the moment BBM for Android & BBM for iOS are available.

BlackBerry first announced that it would be bringing its BBM messaging service to both Apple and Google’s mobile operating systems at its BlackBerry World show this past May. Since then screenshots of the Android variant of the application have leaked, depicting an interface that will be familiar to any user who has had experience with BBM on BlackBerry’s BlackBerry OS. 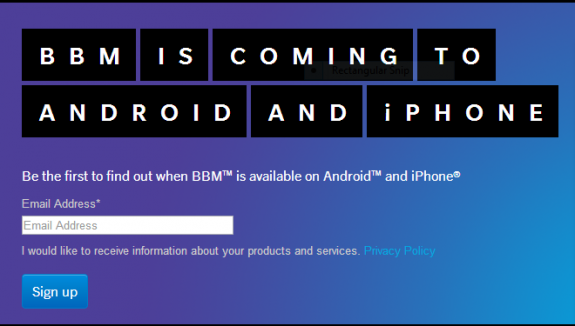 Users can now leave their email address and get a notification on when BBM for Android and iOS arrives.

Read: BBM for Android In Testing

It is generally believed that BlackBerry is making the application widely available so that its users can enjoy communicating with their friends on iPhone and Android without having to use other messaging clients. By making the app and service available, BlackBerry is also hoping to attract BBM on Android and iOS users to its BlackBerry 10 operating system.

While the tactic might have worked just a few years ago, lately each mobile operating system has consolidated around its own built-in messaging service, a few of which are already freely available. For example, iPhone, iPad and Mac OS users are able to communicate with other users on Apple’s platform using the freely available iMessage app. Meanwhile Google’s revitalized Hangouts app is available to all Android users, desktop PCs and on iOS. For its part Microsoft’s Skype is available on nearly every platform.

If the recently released screenshots are correct, users will have to sign up for a BlackBerry specific account before they can use BBM, however there doesn’t appear to be any sort of fee attached with using the service.