Oh here’s a fly in the ointment. The HTC Rezound boasts the inclusion of Beats Audio, which enhances the sound quality on tracks above that of other smartphones and most MP3 players. At the launch event HTC and Verizon demoed this for us, showing how the Beats Audio software activated when one plugged in headphones.

Now that I have our review unit I figured the easiest way to get all of my music on it quickly was just to hook it up to my Google Music account. I did so, plugged in my headphones, and… no Beats Audio. Huh? What gives?

Turns out, Beats Audio only activates when you play tracks in the Music app that comes with the phone. I tried playing tracks with the DoubleTwist app, Slacker Radio, last.fm, and Pandora: no Beats activation. 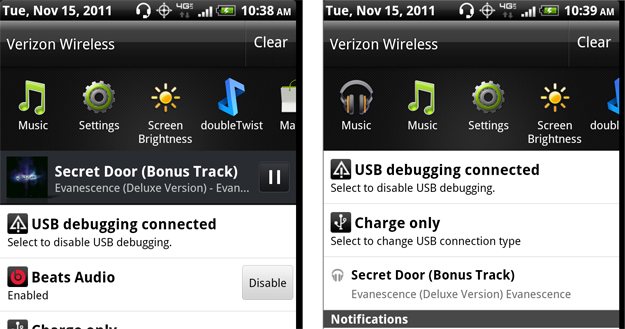 There’s nothing special about the pre-loaded music app.  HTC has added some flair to it, but otherwise it’s the basic app that comes with any Android phone. There’s not even any cool Beats branding in it or a fancy album art carousel.

On the plus side, the app can connect to Media Servers (haven’t tested this yet) and to Verizon’s VCAST music service, so there’s that. On the minus side, you’re confined to this meh music player that doesn’t even stream from existing, popular services.

With video I saw the same thing. Playing vids via the Gallery app also activates Beats Audio, but not playing them via YouTube or the Internet.

This is putting a damper on my enthusiasm for this phone. Shouldn’t Beats Audio be able to detect when music is playing in any app and activate, or even just be aware of the most popular music and video apps. Or even just the other ones that come on the phone, like Slacker?

For a smartphone that’s all about music, this doesn’t seem very smart or music-centric.