In less than a week Apple will show off the future of iOS, which will likely bring the iOS 7 name and a new look to the iPhone and rumored iPhone 5S.

Apple is reportedly refreshing the look of iOS 7 in small ways and is reportedly updating apps to offer a better overall experience. While we won’t know what Apple has in store until next Monday, a new iOS 7 concept shows a great looking iOS 7 Music app that would look at home on the iPhone 5 and rumored iPhone 5S.

Brye Kobayashi shares a collection of iOS 7 concept images showing a flatter music app that offers more than just a facelift. This iOS 7 music app is designed from the ground up top deliver a better user experience when searching for music on your phone and listening to music. We would certainly not be disappointed if Apple rolled out a similar looking IOS 7 music app next week. 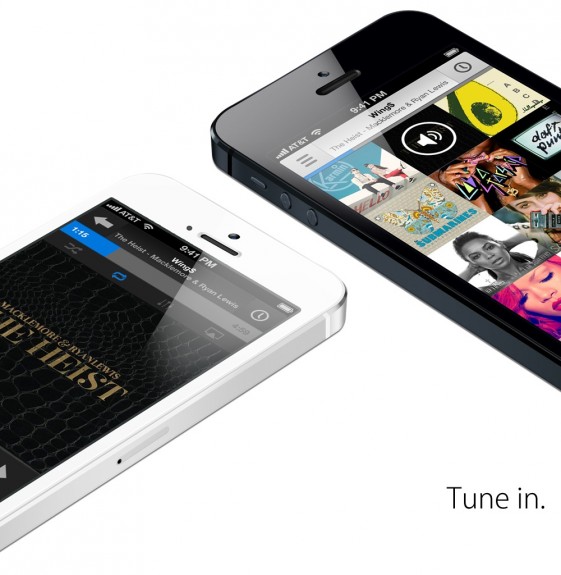 A new iOS 7 Music app concept appears ahead of WWDC 2013.

This iOS 7 Music app concept includes a flat look, but it is not an extreme one. Kobayashi explains his choices saying, “We just need to find the balance between Metro and Skeutomorphic.” He’s talking about the flat look of Windows 8 (Metro) and the real-world inspired touches found in many apps in iOS (Skeutomorphic). Let’s take a look at how this could come to life.

The most appealing part of this iOS 7 concept is the focus on usability, with faster access to the information most users want to see in a Music app and easier controls. At the top of the iOS 7 Music app concept we see the song that is now playing and users can pull down from here to see album tracks. The new top row offers fast access to common settings and the EQ. Users can also scrub to a further point easier with a larger progress indicator. 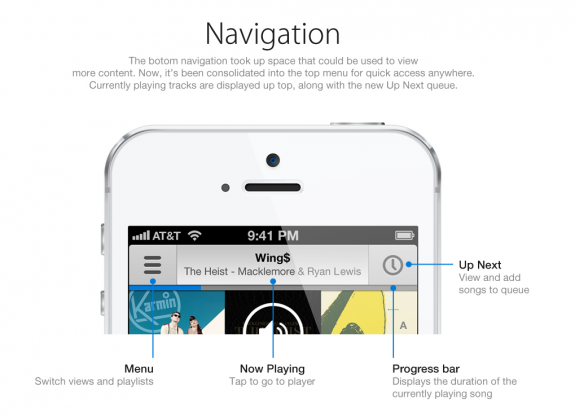 The playback controls at the bottom of the app are now larger for easier touch. The volume slider no longer looks like an aluminum knob yanked from a home theater deck.

The visual style of the iOS 7 Music app concept includes faster access to playlists and alternate views, with a Spotify like menus slider. One annoyance with many iPhone music apps is the number of taps it takes to switch from one playlist to another. On top of the new menu access there is an album view mode that puts cover art front and center. 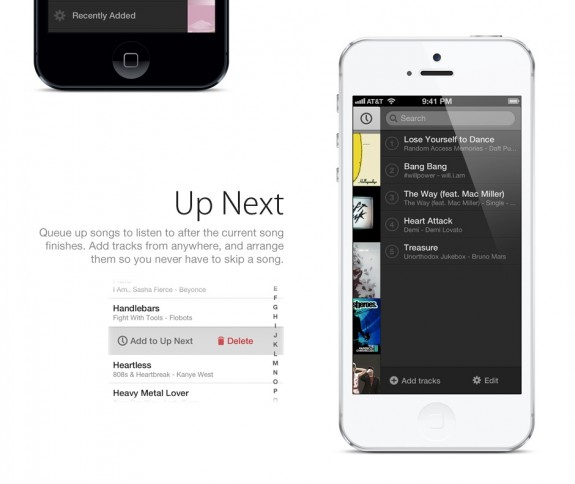 This iOS 7 concept focuses on the music app and offers the Up Next feature from iTunes.

iTunes 11 brought an Up Next feature that allows users to see what tracks will play next and to create an on-the-fly playlist by adding songs to the Up Next queue. This vision of iOS 7 adds an Up Next feature to the iPhone, where it would arguably see more use.

Apple will take the stage at WWDC 2013 on June 10th to show off the future of iOS. We expect to see iOS 7 and several new features for the iPhone, iPad and iPod touch at this software focused event.