The Case Marine is an impossibly thin waterproof iPhone case that really needs to come to the United States.

Discovered by Gizmodo, the case represents something profoundly different in the world of waterproof iPhone cases. While most waterproof iPhone cases are bulky and ugly, the Case Marine is both attractive and thin. The case only measures a mere .25mm in thickness, much thinner than the waterproof cases iPhone owners will find online or in retail stores.

In fact, the Case Marine is so thin, that another smartphone case can be put over the top of it.

The case fits both the iPhone and the Samsung Galaxy S II and it’s made of polyurethane. It also features a clear panel that sits right on top of the screen of the phone, protecting it from harm.

Speaking of that, the case allows the phone to be brought to underwater depths of 32 feet. We doubt many people will take their phone to that level but it’s nice knowing that that kind of protect is in place.

While that’s all gravy, there is a caveat that comes with the case. It appears as though it’s only on sale in Japan. Those that live in Japan are able to acquire the basic version of the Case Marine for a mere $15 while a premium version of the case checks in at $38 which is still relatively inexpensive for a case. 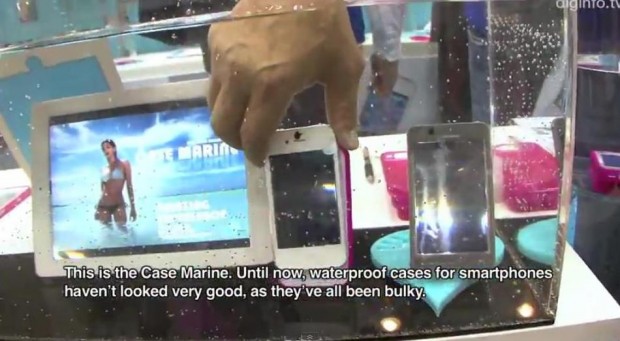 The premium version of the case protects the back panel on the phone.

The maker of the Case Marine says that an iPad version of the case will soon go on sale for $50 and we can only hope that at some point, the company takes there wares to the United States and elsewhere.

In the meantime, U.S. residents might want to look at case maker iOttie which offers something similar for both the iPhone and iPad.