The new Belkin Ultimate Keyboard Case is a rare keyboard case that protects both the front and back of the iPad. When closed the case makes the iPad look more similar to a laptop than a tablet, though some users might prefer that. The Ultimate Keyboard Case uses aircraft grade aluminum to keep it thin so it doesn’t make the iPad much thicker.

Belkin claims the keyboard in the new case feels and performs as well as any laptop keyboard, though it’s impossible to comment on those claims without testing the device.

Unlike most keyboard cases, Belkin’s new case has three different slots for the iPad to rest in, giving users an option of what angle they want. The iPad will magnetically lock into each slot so there’s very little chance that it will move around while in use.

When users don’t want the hardware keyboard, it can fold into the back of the iPad. The keyboard makes the iPad a bit thicker, but users won’t have to remove it entirely to use it as just a tablet, which is better than most iPad keyboard cases. Users have to take off most keyboard cases in order to use their iPad as just a tablet. 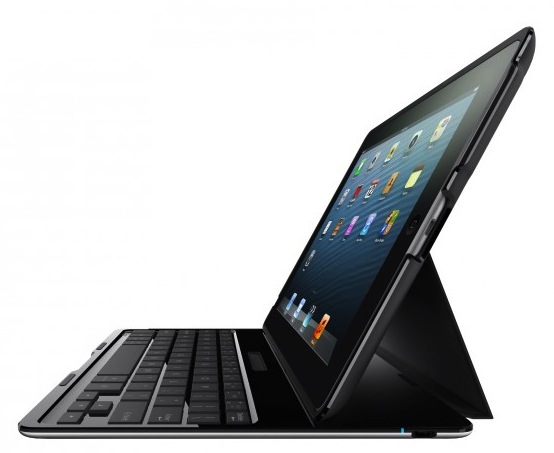 The back case on the Belkin Ultimate Keyboard Case has holes for every port and switch, and it also makes it easier to hear sound from the iPad. The case will direct sound from the iPad’s speaker towards the user instead of away from them.

The Belkin Ultimate Keyboard Case will work with the third generation and fourth generation iPad as well as the iPad 2. Users looking to upgrade to the next-generation iPad later this year may want to think twice about the Belkin case as the next iPad will likely feature a new design.

The Belkin Ultimate Keyboard Case is available for pre-order now. The black version costs $99.99, while the white version will cost $129.99.