It looks like in addition to its Galaxy smartphones and tablets, Samsung is still interested in the personal music player market and the company is working on a new YP-GP1 Galaxy Player that will run on Google’s Android Ice Cream Sandwich software. Prior versions of Samsung’s Galaxy Player units ran on Android 2.3 Gingerbread and this will give  Galaxy Player an OS that matches what is available on Samsung’s latest Galaxy S III flagship Android smartphone.

According to a leaked Nenamark benchmarking result, it is known that the YP-GP1 Galaxy Player would have a display with a resolution of 897 X 540 pixels. Likely, the screen would be a qHD resolution with a pixel resolution of 960 X 540 and the reduced pixels may be to accommodate for the on-screen Android navigation keys. 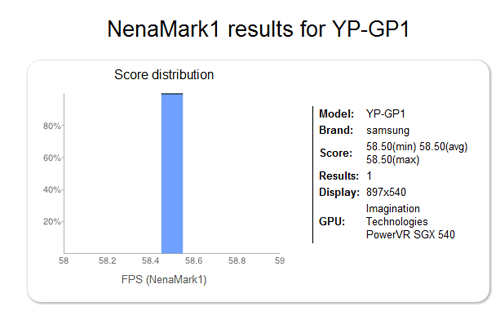 Nenamark says that the device will have a 1 GHz processor–it’s unclear if it will be a single-core or dual-core model–with a GPU from Imagination Technologies in the form of the PowerVR 540.

Samsung is positioning its touchscreen-based Galaxy Player as a competitor to the iPod Touch from Apple. The Galaxy Player would eschew wireless cellular and mobile broadband connectivity in favor of WiFi to keep costs down. The device would have access to Google’s Play Store for apps and content.

The device may likely be announced at the IFA tradeshow alongside the much rumored Galaxy Note 2 phablet, according to Sammy Hub.