In the ever-growing and increasingly redundant world of netbooks, BenQ has announced it will also join in on the fun with its own iteration of the netbook. The specs are standard run-of-the-mill including the Intel Atom processor running at 1.6GHz, 1GB RAM, a standard HDD of unknown (probably between 80-120GB) capacity, and a 10″ screen. There will also be a 8.9″ screen option. The OS sees a choice between Linux and Windows XP. Why should you care, you might ask? Well, up to this point, netbooks came in colors that were pretty vanilla. This is where BenQ actually has set itself apart from the crowd — sort of. The colors will come in a patterned peach, a patterned white, as well as a patterned blue. It’s arguably better looking than the standard black or white that we’ve mostly seen. The 8.9″ variant is scheduled for an October release followed by the 10″ in November. 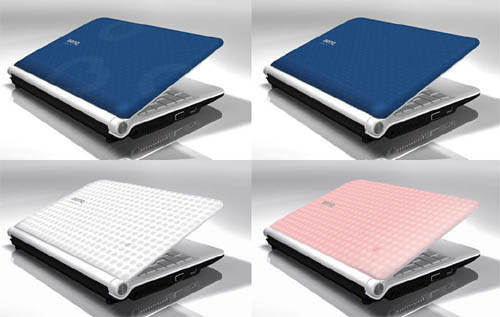