The Motorola Xoom may be priced on the high side with an $800 price tag for launch on February 24th according to an advertisement from Best Buy. The Android 3.0 Honeycomb capacitive touchscreen tablet will initially launch with Verizon Wireless’s 3G CDMA/EV-DO support and will have the radio be upgradeable to 4G at a later date. At $800, the price point may be comparable to the highest end iPad model–the iPad 3G at 16 GB retails for $629, 32 GB for $729, and 64 GB for $829. Given Motorola’s and Verizon’s pricing on the Xoom, it seems that the two are betting that Android 3.0’s user experience will be competitive with the iPad’s as the duo are not competing on price with their first Android 3.0 slate to hit the market. 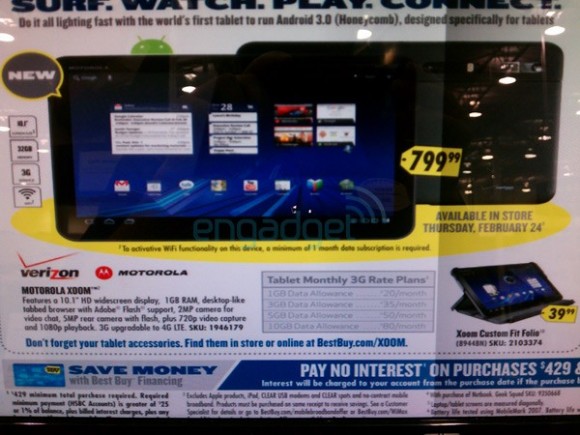 Additionally, it seems that the WiFi radio, or the tablet’s activation process itself, may be locked down. To free WiFi, users will need to subscribe to at least 1 month of 3G mobile broadband data. It’s unclear how this works, but Verizon Wireless’s handsets–smartphones–in the past are usually set up to go through an activation process at first start up. The Xoom may be subjected to the same activation process and the firmware may not allow users to proceed without first activating it on the carrier’s mobile broadband network, forcing users to pay for at least 1 month of 3G data. The move, then, would force consumers to pay for at least the $800 tablet price plus a minimum of 1 GB of mobile broadband 3G data for another $20 for the first month, bringing the out of pocket expense of the Xoom to $820, closer in line with Apple’s iPad 3G with 64 GB of internal storage pricing of $829.