If you’re one of the many users hanging on to an Xbox 360 or Sony’s PS3 gaming console, Best Buy has a new deal that just may be enough to convince you to upgrade. As of yesterday, Best Buy shoppers can trade in their older console towards a deal that knocks a minimum of $150 off the price of an Xbox One.

S3 console you have. Those with an Xbox 360 with a 250GB hard drive or a Slim PS3 get $100 on a gift card that they can use that day. Users can save even more by trading-in up to four controllers for an additional $10 per each. 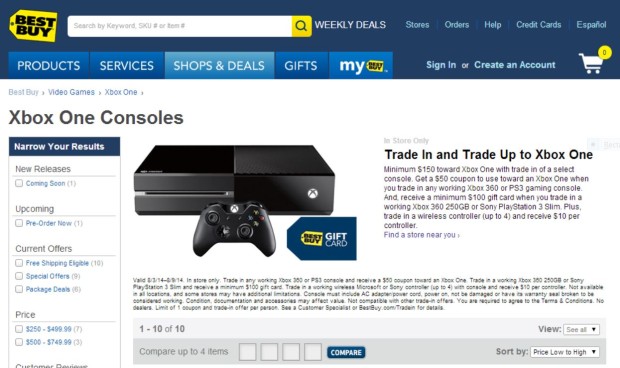 Like any deal, there are some catches. Consoles users submit for trade-in don’t just have to actually function. Users must also provide the power cord too. That Xbox 360 or PS3 can’t have been opened for modifications either. Potential Xbox One buyers can only pull off the trade-in once too; Best Buy is only heading out a single coupon per person.

That being said, it’s an absolutely excellent deal for anyone considering purchasing the Xbox One. The deal only stipulates that users purchase an Xbox One. That means that users could get the Xbox One without the Kinect sensor that costs just $399. Those who take advantage of this deal for that entry-level Xbox One could get the console for just $250 before taxes.  By comparison, buying a new Xbox 360e with Halo 4 and Tomb Raider included would cost users $299.99 at Amazon.

This deal is made all the more great by its timing. Yesterday Microsoft revealed an Xbox One bundle that doesn’t include a Kinect 2 sensor, but does give users a free copy of Madden NFL 15, the latest version of the famed football franchise that’ll debut on August 28th. Best Buy is already taking pre-orders for that console, meaning users should be able to apply their trade-in bonus to the Madden NFL 15 bundle and get a free game on top of that steep discount. Normally, Madden NFL 15 will sell for $60.

That being said, there are still plenty of games on the Xbox 360. Users who haven’t yet finished them are better off waiting for another deal to surface. The Xbox One isn’t backwards compatible with Xbox 360 games. As such, it’s a good idea to finish the games you own before trading the Xbox 360 or even the PS3 into Best Buy.

Best Buy will offer the Xbox One trade-in deal to users who come to its stores until August 9th. At that point, presumably the Xbox 360 will go back to its regular trade-in value of $110. If you’re considering taking Best Buy up on the offer it’s probably a good idea, to call ahead – Best Buy says all of its stores aren’t participating.