Thanks to a new Microsoft Band deal, almost anyone can get Microsoft’s Fitbit and Apple Watch rival for a lot cheaper than they could just weeks ago. All told, the deal brings the price of the Microsoft Band down to $79.99. 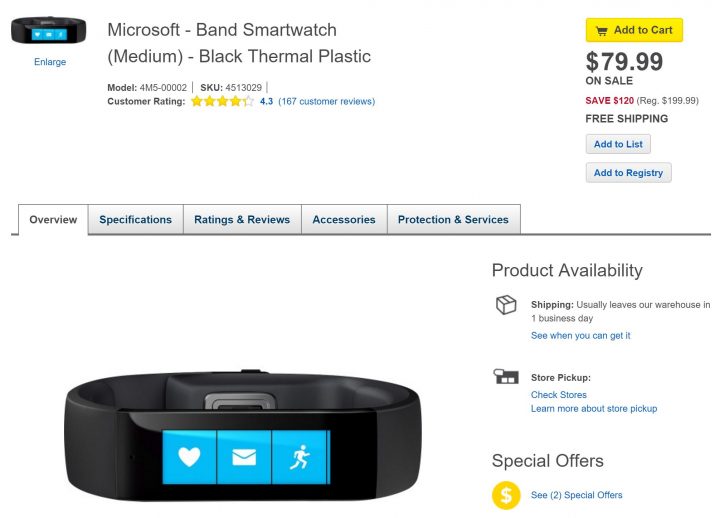 Microsoft sold the Microsoft Band for $199.99 at release, but Best Buy is guaranteeing that shoppers will pay just $79.99 for the device now. All three sizes of the Microsoft Band on the Best Buy website have that same price; Microsoft makes them in small, medium and large sizes since sensors built into the band itself mean its arms aren’t interchangeable.

Best Buy is offering free shipping with this Microsoft Band deal. It’s also letting users purchase the device online and pick it up in one of its retail stores.The company doesn’t list a date for the sale’s end, hinting at the possibility of this being a permanent price cut for the device.

Microsoft announced the Microsoft Band 2 at a press event in New York City on October 6th. Around that time the company also lowered the price of the original Microsoft Band. It’s stores aren’t matching this price cut at Best Buy. The Microsoft Band price at the Microsoft Store remains steady at $129.99. Shoppers who take advantage of Best Buy’s sale get $50 in instant savings and don’t necessarily have to wait for a delivery driver to arrive.

The Microsoft Band has an optical heart rate sensor, accelerometer, gyrometer, GPS technology, Ambient light sensor, skin temperature sensor, UV sensor, capacitive sensor and a Galvanic skin response sensor. In all, there are 10 different ways for it to track activities. A flat 11mm x 33mm touchscreen lets users glance at the time, track their alerts, read emails and interact with Microsoft’s Cortana personal assistant if they have a Windows Phones.

The Microsoft Band 2 does include a sensor that the original doesn’t: a barometer for tracking altitude. This allows Microsoft Health to better account for stairs and changes in elevation during the day, which can have an effect on fitness. The Microsoft’s Band 2’s display is also curved. It’s mildly better looking when compared to the original. Whether that’s worth spending $249.99 instead of taking advantage of this Microsoft Band deal and spending on $79 isn’t clear.