With the evasi0n iOS 6 jailbreak out and already on millions of devices it’s time to check out the best Cydia apps available for iOS 6.

The following Cydia apps will allow users to tweak, customize and do more with their jailbroken iPhone, iPad or iPod Touch. All of these Cydia apps should work in on iOS 6 an iOS 6.1.

Most of these Cydia apps are aimed at the iPhone, and several are specifically designed for the iPhone 5, but we have a few great iPad cydia apps as well.

Unless noted, all of our best Cydia apps are available by searching Cydia without adding any extra repos.

Auxo is one of the best Cydia apps available for iOS 6. Auxo replaces Apple’s tired old Switcher with one that shows a card for each open app for a nicer looking switcher. User can also end and app with a swipe down, or end multiple apps at once by swiping down with more than one finger.

Swipe left to right in Auxo for a larger easier to use music control app and again for access to quick settings and a screen brightness toggle like the iPad.

Jailbreaking the iPhone or iPad is a great way to customize the look of the device, and Winterboard is the best Cydia app for giving your iOS device a new look.

WinterBoard is a free Cydia app that allows users to download and install themes that customize the look of the iPhone icons, status bar and much more.

Users can search for a number of great Winterboard themes for the iPhone and iPad, but ayecon is a standout theme that users should check out right off the bat. Ayecon, pronounced icon, is a $2.99  WinterBoard theme that includes over 120 new icons that automatically replace stock and third-party icons.

Most iPhone apps are updated to run on the iPhone 5’s larger screen, but not all of them are quite ready. Full Force for iPhone is a 99 cent Cydia app that forces older apps to use the full screen on the iPhone 5. 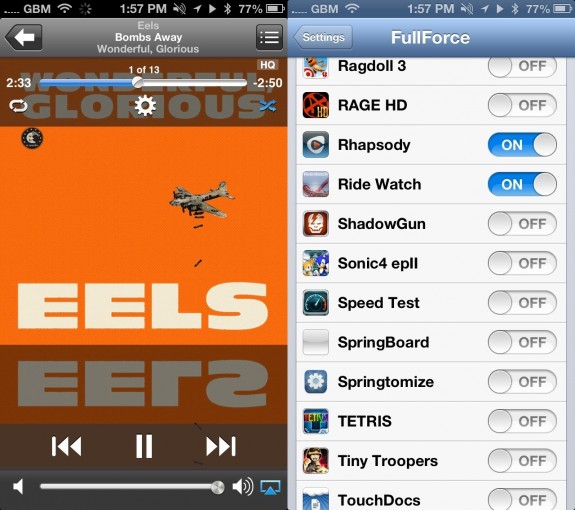 The app works on most apps without any issue, though occasionally an in-app ad may show up higher than it should. The biggest reason for installing this is to keep the iPhone 5’s keyboard from getting pushed up form the bottom of the screen.

F.lux is one of the essential Cydia apps for users who use the iPhone or iPad at night or early in the morning. The app adjusts the temperature of the display to prevent the super-bright display from messing with your ability to fall sleep.

The app determines sunset  based on your location and adjust the screen accordingly. There is an option to turn it off quickly if you need the iPhone or iPad’s screen to be normal.

IntelliscreenX is a lock screen Cydia app that puts the Notification Center, Facebook, Twitter, News and more on the lockscreen so it’s easy to see what’s going on without unlocking the iPhone.

IntelliscreenX is $9.99 for new users and a $4.99 upgrade for existing users. The app comes with a free trial.

If you hate those annoying low battery popups that interrupt whatever you are doing to tell you that battery life is at 20% or 10% left, grab the free LowPower Banner cydia app. 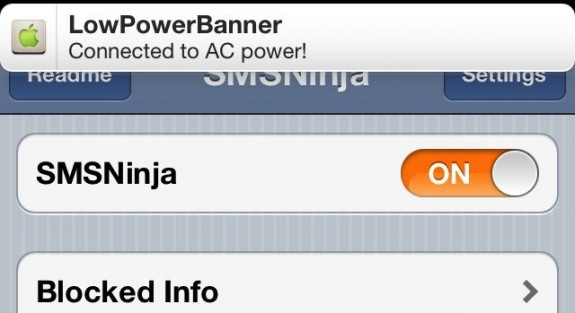 LowPower Banner lets users customize the actions and sounds when the phone is charging, and when battery power is low. Most importantly it makes the pop up alert for low battery life an unobtrusive banner.

Safari can load pages faster than other apps, but with the Nitrous Cydia app users of the iOS 6 jailbreak can speed up Chrome and browsers built into other apps like Alien Blue. 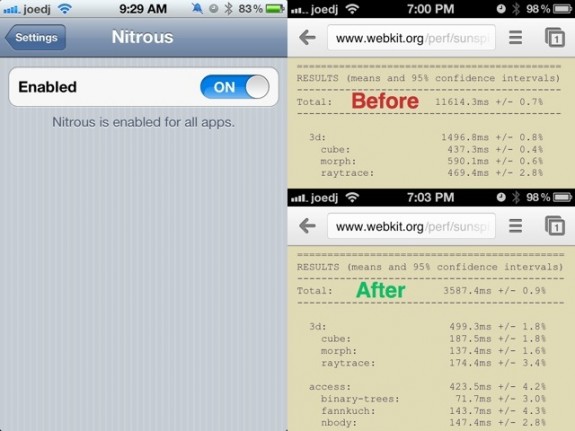 Nitrous lets third-party browsers use the Nitro Javascript engine that is normally reserved just for Safari, speeding up browsing across the board. Nitrous is 99 cents in Cydia.

Springtomize is an app that lets user take control of many iPhone and iPad settings. The $3 Cydia app allows users to put more icons in the dock, create more rows of icons and perform other icon related tweaks. 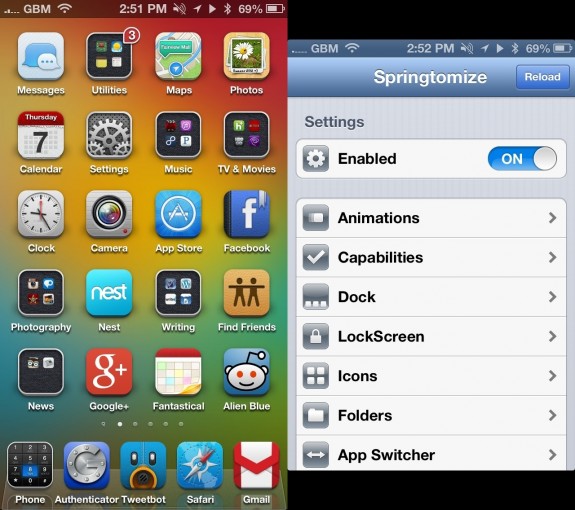 Springtomize also allows users to put a custom carrier in the upper right corner, and much, much more. Check out Springtomize on the Cydia app store to see everything it can do.

Springtomize 2 is available for iOS 5 and iOS 6.

Users who like the look of the BlackBerry 10 keyboard, with on key word suggestions and the ability to flick a word up to the text entry box, will like the Octopus Keyboard. 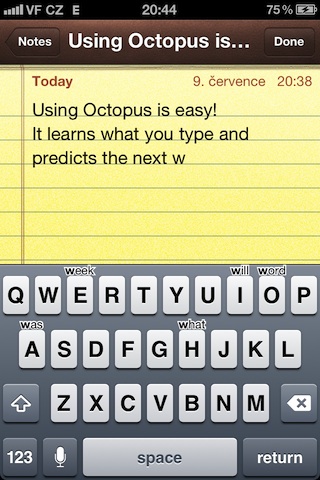 The Octopus Keyboard is like a BlackBerry 10 keyboard for the iPhone.

Octopus Keyboard is a $5 keyboard replacement that users will love or hate. The app takes some getting used to, so it would be nice if there was a trial, but at $5 it’s worth a shot for users who want a different typing experience on the iPhone.

Activator is a free Cydia app that allows users to set up gestures to take the place of button presses. The app is one of the first Cydia apps available and it remains a must have Cydia app. 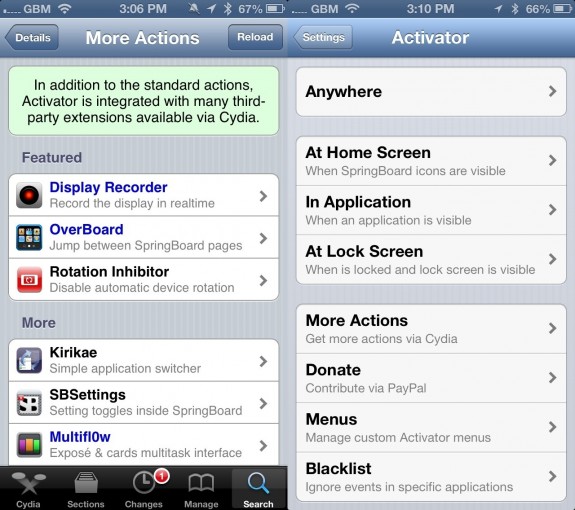 Activator is a free Cydia app that brings more gesture control to the iOS 6.

In addition to the built-in functions, users can also download third-party Activator extensions to do even more.

BeeKeyboard is a Cydia app that is best suited for the iPad or iPad mini as it allows users to set up custom Bluetooth keyboard gestures.

Users can even link BeeKeyboard up with Activator for more control and download add ons to control apps like Safari from the keyboard.

SBSettings and NCSettings are two Cydia apps that put quick controls in the Notification Center or with a swipe on the status bar. 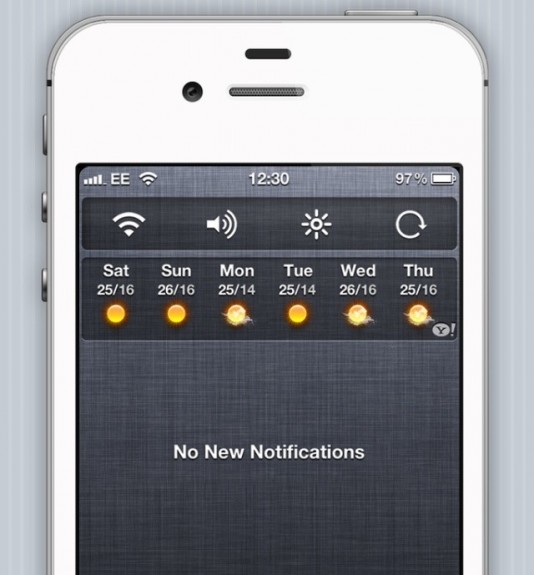 Both of these apps offer fast access to toggles for Bluetooth, re-springing, brightness and more. SBSettings and NCSettings are free in the Cydia app store.

BiteSMS is a message replacement Cydia app that offers a lot of added functionality to users who want to to quick reply to messages, auto-forward and other features.

BiteSMS is a free Cydia app, but users can get a pro version with no ads. BiteSMS is a continual favorite jailbreak app and it’s as good as ever on the iPhone 5.

Dashboard X is a great Cydia app that lets users put widgets on the iPhone home screen, like Android users can. The app can let users widgets like NCSettings on the home screen and widgets to tweet or calendars.

Here are a collection of the best Dashboard X widgets to get you started. Dashboard X is $1.99 in Cydia.

If you prefer to use Google Maps over Apple Maps, MapsOpener is a Cydia tweak that will force the iPhone to open map links in Google Maps automatically. 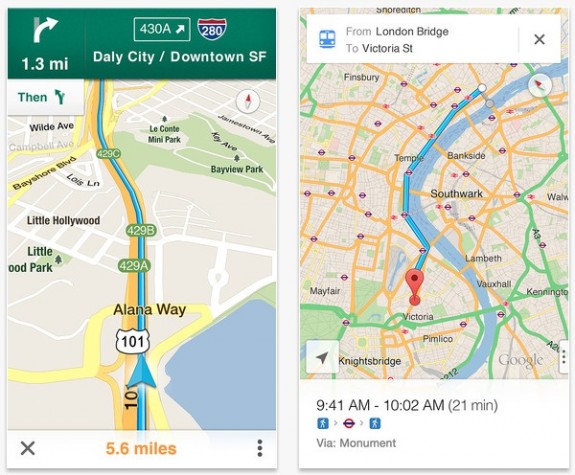 MapsOpener is a free Cydia Tweak that is compatible with iOS 6 and is a must have for any Google Maps user.

Plugication is a nice small Cydia tweak that automatically starts playing your music when you plug your headphones in. This is handy for users who rely on the iPhone or iPad for music and audio books, and a great way to get your music started back up when plugging into an AUX in a car. Plugication is free.

Jailbreak users looking for more gesture control can install Zephyr to control the iPhone with multitasking gestures like those found on the iPad.

For example, users can swipe up to reveal the switcher and swipe from the side to switch apps. Zephyr is $4.99 on the Cydia app store.

Quasar is a window manager for the iPad that allows users to use multiple apps at once, kind of like the Galaxy Note 2, but with more flexibility. Users can open apps in windows side by side as shown in the video below.

Quasar is one of the best Cydia apps for the iPad and it costs $9.99 in the Cydia app store.

TetherMe is a Cydia app that promises free tethering for iPhone users without paying their carriers’ monthly fees. The App claims to hide tethering activity, but it is likely against your terms of service so use it at your own risk.

TetherMe uses the same Personal Hotspot feature that is built into the iPhone for WiFi, Bluetooth and USB tethering. TetherMe is $4.99 in the Cydia app store.

3G Unrestrictor is a Cydia app that removes the limits Apple puts on downloads, letting users download large apps, HD movies and more while on 3G and 4G LTE.

Read: Why I Decided to Jailbreak the iPhone 5

3G Unrestrictor is $3.99 in the Cydia app store. Users should be cautious of going over their mobile data plan limits.

Do you constantly get phone calls from an ex or from a debt collector? If so iBlackList is a great Cydia app to install. After installing iBlackList, the iPhone will block calls, iMessages, texts, photo messages and FaceTime calls from unwanted people and companies. 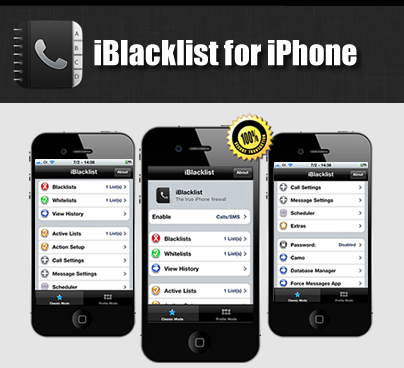 iBlackList blocks calls, texts and more on the iPhone.

iBlackList is a available as a free trial with a $12 purchase option.

Nintendo won’t likely ever bring old gaming classics like Mario to the iPhone, but with a jailbreak and the right Cydia apps it’s possible to play NES and Super NES games on the iPhone with an emulator. Users can also pair a controller for a better experience.

NES.emu is only available through the developer’s website, and SNes 9X EX is available in Cydia. The apps do not come with ROMS, and it is illegal to download ROMS of copyrighted games.

Password Pilot and Password Pilot Pro are Cydia apps that remove the need to enter your iTunes App Store password when you buy an app or upgrade in iTunes.

This is not recommended if you share your iPhone with others, or don’t use a PassCode as anyone who has your phone will be able to make purchases. Password Pilot is Free, Password Pilot Pro includes more options and is $1.9 in Cydia.

Check out the latest Jailbreak news and guides.