This year the Note received a lot of upgrades, even if the design remains similar. It has double the storage with 64GB to fill with apps, games, music, movies and recorded 4k video. Not to mention water-resistance, a microSD slot, better camera, bigger battery and improved security. There’s a lot to like.

Read: How to Reset a Frozen Galaxy Note 7

Even though Samsung is giving out a free 256GB microSD card to early adopters who buy it within the first few weeks, millions of users will need and want to get a microSD card. With tons of different sizes, speeds, brands and more there’s a lot to consider, and below we’ll share out suggestions for some of the best choices for Note 7 owners. 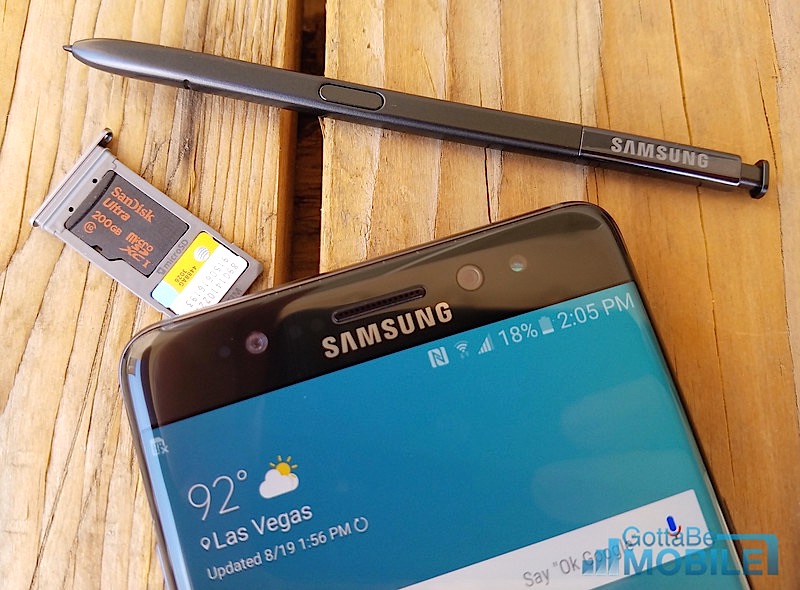 A microSD card is a little chip smaller than a dime, which goes inside the phone using the removable tray on the top. The same slot that houses the SIM cards for your network has a space for the microSD. Using the SIM slot removal tool that comes in the box owners can remove the SIM tray, put a microSD card next to it and slide it back in. Instantly doubling the Note 7 to 128GB for a low price.

In fact, we can add a 128GB microSD card to the Note 7 in a matter of seconds, giving it far more storage than any iPhone. It’s a feature millions of users love, so lets take advantage of it.

As many of you probably know, microSD cards have really come down in price over the past couple of years, all while sizes have increased to huge limits. There are now 256GB microSD cards readily available, and even 64GB options are as cheap as ever before. It’s worth noting that typical stores are not where you want to buy one, as they are extremely overpriced. Carrier stores like AT&T or T-Mobile, and even Best Buy are all a no-no. That said, Best Buy has good deals on occasion, and will price match Amazon and others if you’re looking to get one today.

Our recommendation for most average users would be a 64GB card, but power users may want to jump at something even bigger. With that all said, below is a collection of some of the best microSD cards for the Galaxy Note 7. Best in terms of price, speed, performance and more.