The iPad has always been a great magazine and newspaper reading platform, and with the Retina Display update in the iPad 3rd gen, users have one more great reason to go all digital with their periodicals. Many popular magazines put out digital issues in the form of apps, but there are other options, especially if you’re a multiplatform user.

Apps that give you access to all of your digital subscriptions in one place and across your Android, BlackBerry, and webOS devices plus your PC or Mac offer much more freedom and portability. And you’ll have a wider range of magazines and newspapers to choose from.

There are a few good choices in this category, but one rises to the top: Zinio. 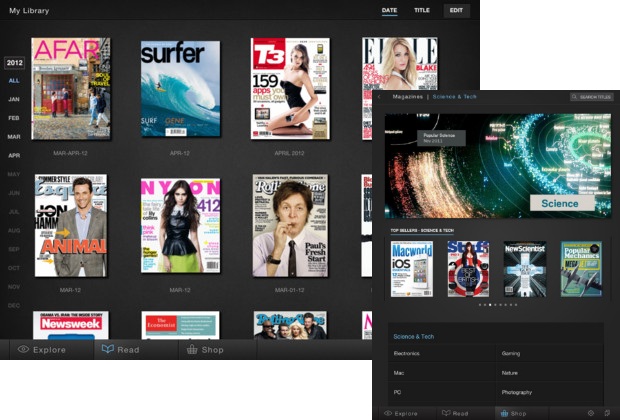 Zinio’s library of available magazines is most of what makes it stand out from other contenders. The service boasts over 5,000 periodicals in categories ranging from Home and Lifestyle to Science, Tech and Travel. You’ll find most of the major titles here and probably many you haven’t heard of.

The newsstand also offers more than just English-language titles. There are magazines in French, German, Russian, Dutch and many others.

Reading in Zinio closely matches reading the print version of a magazine except you get perks like pinching to zoom in on text and quickly jumping right to the article you want. The app also offers a plain text view of the contents of each article if you want to focus on that and not the images, layout, or ads. This app is Retina-ready, so even when text is small it’s still crisp and readable.

On top of that, Zinio also carries enhanced digital magazines that include web links, video, or audio within the pages.

Readers will also find a nice selection of free magazines and articles available, so even if you never buy anything you can still get access to engaging content.

I’m in love with the ability to search not only for magazines, but also within them. If you’re looking for an article you heard about or saw but lost, you can find it from within Zinio even if you can’t remember the exact issue or even the magazine.

The Zinio app is also available for iPhone, Android, BlackBerry, HP TouchPad, Mac and PC. Your subscriptions and issues are available no matter which app you decide to use. 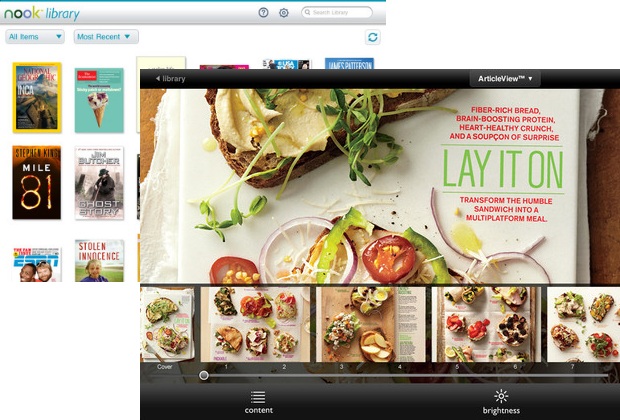 Aside from Zinio, this is one of my favorite Retina-ready apps for reading magazines. Barnes & Noble designed a very similar reading experience — full layout or plain text ArticleView, pinch and zoom, etc. — and offers two-page spreads in landscape mode. Nook users also get the benefits of enhanced ePeriodicals with embedded links and media.

Subscriptions are available across tablet platforms, though on phones the selection is restricted and you won’t see the print layout version.

Though the Nook Newsstand has fewer titles (just over 500), the offerings include both newspapers and magazines. If you’re looking for major American titles from big publishers, you can likely find them in the Nook app. Plus, if you already have Nook books, you can do all of your eReading in one app. 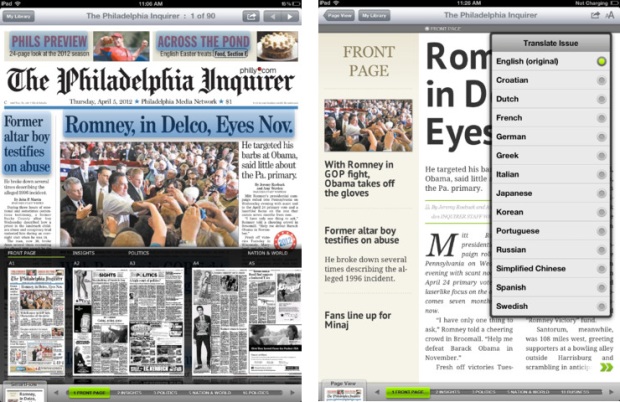 If you’re more of a newspaper person than a magazine buff, then PressReader is your app. Though the service — NewspaperDirect — does have a few magazines in the library, newspapers make up the majority of their offerings. Users have access to over 2,100 newspapers in 54 languages from 95 countries.

The reading experience isn’t as polished in PressReader as it is in the Nook app or Zinio, possibly because the developers hew too close to how people read print newspapers. The layout is less important than the actual text in this case. Still, it looks pretty good on a Retina display. PressReader offers some nice extras like saving articles to Evernote or InstaPaper, auto-translation, and searching across newspapers.

I mention Apple’s Newsstand app only to point out that it’s not the same type of app as Zinio, Nook or PressReader. Instead of being a place where you can access digital periodicals, it simply collects all of your magazine and newspaper apps into one folder so they’re easier to find and see what’s been updated. It doesn’t work across platforms, though.