Apple’s newest iPad, the iPad Pro, has broken the mold in more ways than one. Not only is it the most powerful iOS device ever created, but it’s also the largest – by a substantial margin. As a result, no pre-existing iPad cases will fit the giant tablet, so we’ve researched what’s out there and put together a list of the best iPad Pro cases – so you can keep your new investment protected.

Let’s take a step back and compare sizes for just a second. The current iPad Air 2 is similar in size, albeit much thinner and lighter, to the original iPad: the footprint just hasn’t changed that much over the years. That means that in addition to the 9.7-inch display, you’re looking at a tablet that sits 9.9 inches high, 6.6 inches wide, and 0.24 inches deep. Super thin.

The iPad Pro, on the other hand, has beastly 12.9-inch display, with a corresponding 12-inch height, 8.68-inch width, and 0.27-inch thickness (which is, impressively, thinner than my iPhone 6s Plus). It’s also more than 60% heavier than the iPad Air 2. If you’re lucky enough to own an iPad Pro, you are probably familiar with all of these specifications, so you might be asking yourself why I’m bothering to reiterate them.

Given the sheer size and weight of the iPad Pro, it’s simply a good bit more awkward to handle than the rest of Apple’s iPad lineup, especially if you’re prone to holding the tablet with a single hand. Since it’s more awkward, it’s not unreasonable to assume that it’ll be subject to more drops and dings. Additionally, the larger screen and frame size increase the potential for damage inside of a crowded bag – in short, the iPad Pro is better suited than most other iPads to using a case.

If you want an absolutely guaranteed to fit case for your pricey new iPad Pro, look no further than Apple’s own store. While the company offers cases in a rainbow of colors for the other iPads, you can get an iPad Pro case in your favorite color – as long as your favorite color is “charcoal grey.” The Apple iPad Pro Silicone Case slips onto the back of the iPad, leaving the front and part of the lefthand side exposed; the Apple iPad Pro Smart Cover, well, covers the rest. 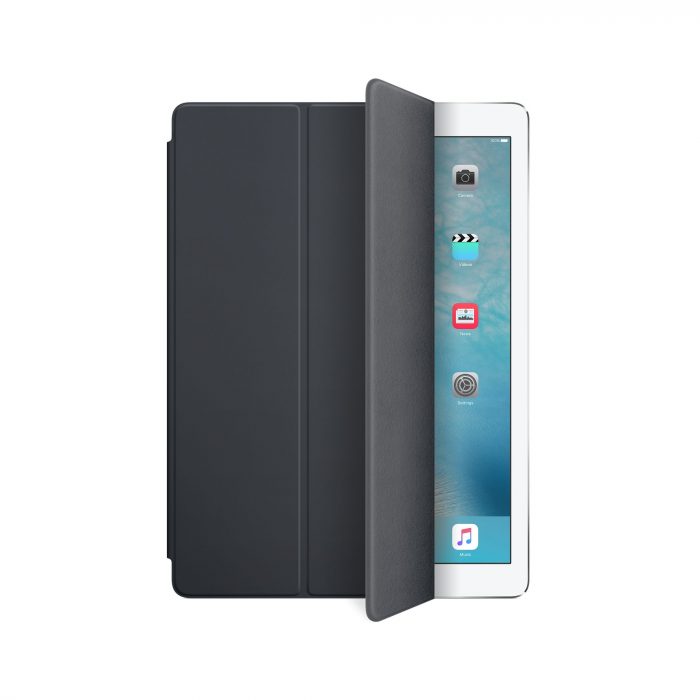 Like previous covers, the iPad Pro Smart Cover can fold in on itself to create a stand, and gets held on by magnets. The only downside to going with the homegrown Apple solution? You can expect to pay $138 for the combination of covers (they are bought separately: the iPad Pro Silicone Case is $79, while the iPad Pro Smart Cover is $59), which is pretty steep given the lack of premium leathers or colors. One thing to note: the Silicon Cover also pairs nicely with Apple’s Smart Keyboard for the iPad Pro, in case you want something to cover the back while the keyboard covers the front of the device.

Cases and covers that make the iPad look more like a book than a marvel of modern technology have been around since the first iPad made an appearance several years ago, and they show no sign of stopping. Portenzo makes some of the best, offering a large degree of customizability, so you can choose the inside and outside fabrics, prints, and leathers, as well as the edge trim color and elastic band. Perhaps the coolest part of the Custom Hardback Case is the use of 3M’s (removable) GripStrips for mounting the iPad to the case – no need to fiddle with straps; just stick the iPad down and you’re good to go. 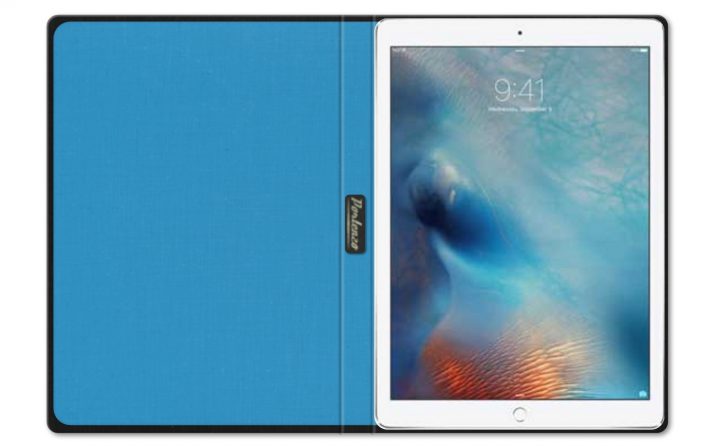 The only real downside to going with a case like Portenzo’s is that there’s little to no stand adjustment; you’ll be left propping it up with whatever’s at hand if you need to use it at a normal angle. If you’re the type who plans to spend their time sketching all day with an Apple Pencil, however, this might be a boon for you. If you’re interested, you can snag one of Portenzo’s Custom Hardback Cases for the iPad Pro starting at just $59.95 (with the price going up depending on what options you pick for customization).

Given the large size of the iPad Pro, and the presumed use cases (think artists sketching, businesspeople and students taking notes), you might be inclined to look for a cover that helps keep you organized. Incipio’s new HILSON Zipper Folio Case sets out to accomplish just that. It keeps the iPad Pro protected with a large cover that zips shut – this is probably not the choice if you’re trying to keep things as slim and svelte as possible. 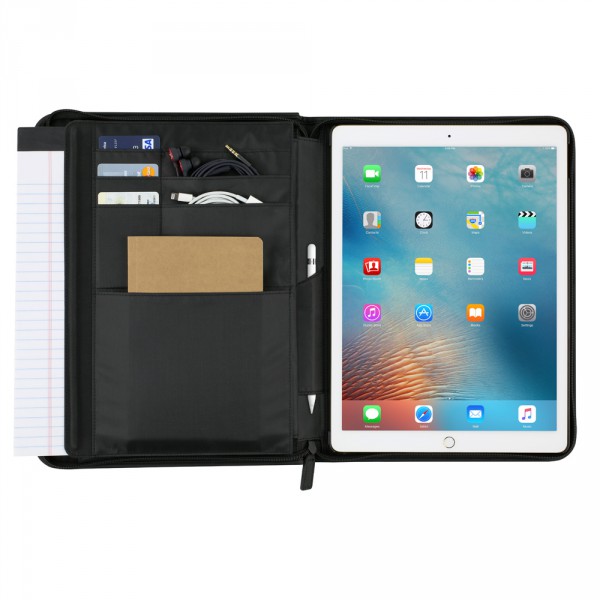 Open it up and you’ll find the iPad Pro nestled snugly into the right-hand side of the HILSON, while the left features pockets for your credit cards or identification, spots for your earbuds and charging cable, and a place to keep a paper notebook, should you feel the need to go analog. Perhaps most worthwhile, however, is the addition of an Apple Pencil slot right in the middle – a sorely needed addition left out of Apple’s own designs. You can order Incipio’s latest iPad Pro case for $59.99.

While Logitech has made the headlines for being the only third party manufacturer to work with Apple in the creation of a keyboard that uses the iPad Pro’s new smart connector, they actually have two separate iPad Pro products hitting the market. One of them you’re likely familiar with; it’s the CREATE cover that has an integrated backlit keyboard. While this is probably the best keyboard you can buy for the iPad Pro right now in terms of typing experience (plus, it’s backlit!), with the cover this case more than doubles the weight of the tablet; together, the iPad Pro and Logitech CREATE keyboard case manage to weigh more than a 13-inch MacBook Air. 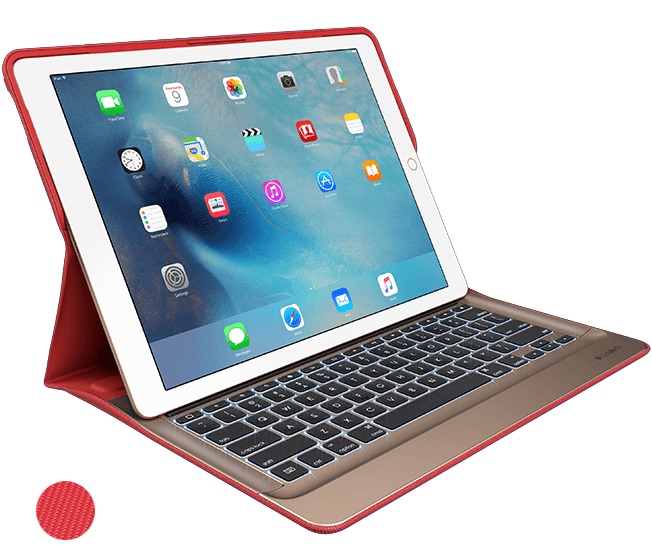 If you want the sleek Logitech CREATE design – and it does look sharp – without the keyboard, Logitech has prepped a cheaper model. This version manages to keep the iPad Prop propped up, no matter what angle you’re sitting at; that’s a notable change from cases that use the iPad Pro’s new 3-pin Smart Connector. You can grab one of these cool textured cases straight from Logitech: if you want the CREATE Backlit Keyboard Case with Smart Connector, you’ll need to shell out $149.99; if you only want the CREATE Protective Case with AnyAngle Stand, you’ll have to pay $79.99.

Inateck saw how similar in size the iPad Pro is to Apple’s 13-inch MacBook Air and jumped at the opportunity. While this fuzzy felt case was originally designed to protect a laptop, the marketing was quickly rejiggered to target new iPad Pro users. I don’t mention this as a negative for the case; if anything, it shows Inateck’s marketing savvy. The case itself is made almost entirely of felt, which means you’ll be able to keep your new tablet safe and secure in a scratch-free sleeve. 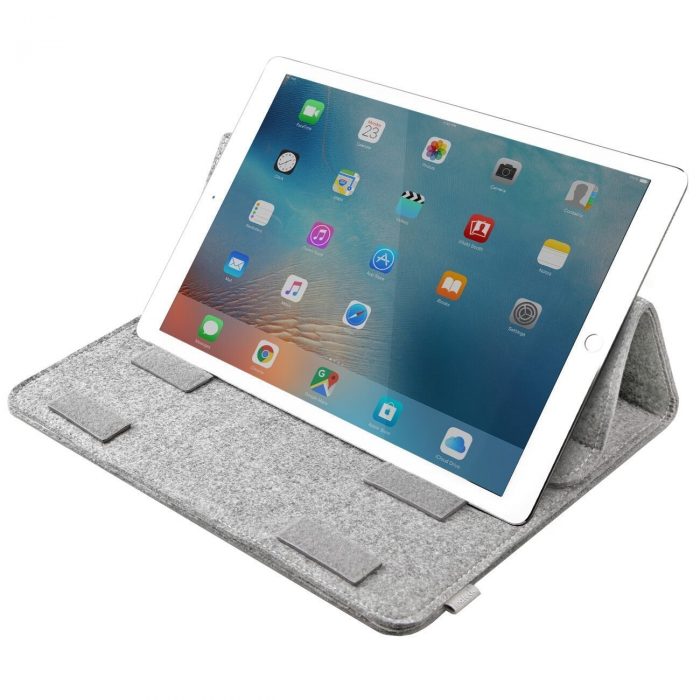 Unlike most sleeves, however, Inateck’s version has a few additions. Part of it folds up similar to one of Apple’s Smart Covers, while felt tabs brace your iPad Pro on the bottom. It gives you two or three different angles to set the iPad Pro, and when you’re finished working, the tablet slips easily back into the sleeve – it’s not actually attached at any point. You can snag one of these soft cases off of Amazon for just $22.

One of the sleekest options we’ve seen, this Tekshell Slimline iPad Pro Case is great for users who want to keep the iPad Pro’s profile as slim as they can. Made of a soft-touch silicone, this red and black case can hinge backwards to hold your iPad at the angle you desire, while strips of silicone on the inside flap keep it from falling forward (note: shallow angles don’t appear to be as stable with this case). 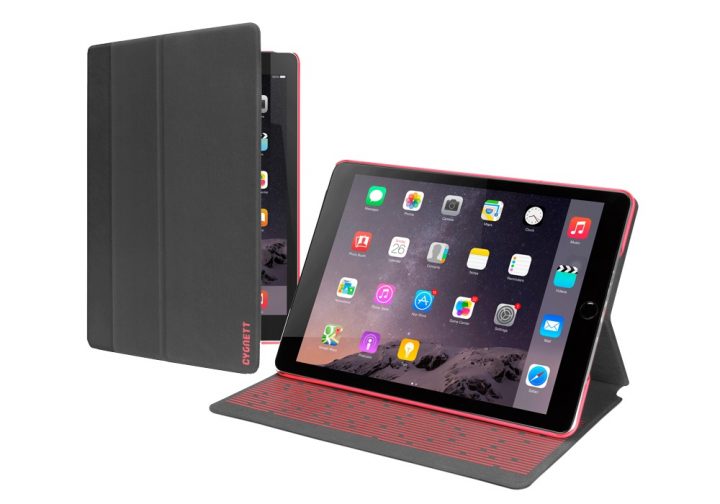 Coming out of Australia, this sleek silicone case is a tempting alternative to more expensive options, such as those provided by Logitech and Apple themselves. If you’re tempted by the Tekshell Slimline, you can order one directly from the manufacturer for approximately $37 ($49.95 AUD).

While not a case in the strictest sense (and you’ll find this gadget on our list of the best iPad Pro keyboards, too), we’d be remiss without mentioning the Apple Smart Keyboard, Apple’s first-party solution for taking advantage of the iPad Pro’s new Smart Connector. Similar to the low-profile keyboard covers Microsoft invented for the Microsoft Surface, Apple’s Smart Keyboard looks a lot like a regular Smart Cover – until you open it, that is. 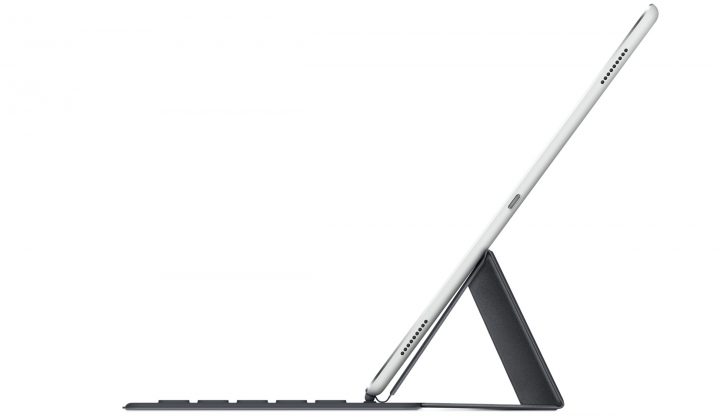 Inside is a slim keyboard built directly into the cover’s fabric, with a slot at the top for the iPad Pro to sit. When you aren’t using the iPad, the keyboard folds over itself onto the screen of the tablet, appearing once again as a regular cover. Of note is the fact that this cover offers no back protection, just like the rest of Apple’s Smart Covers; you’ll have to shell out $79 for the iPad Pro’s silicone case to cover up completely. Considering that the Apple Smart Keyboard will run you $169 on its own, that might be a hard pill to swallow.

Ordinarily I wouldn’t put a “planned” device on our best of lists, but Catalyst is offering a unique new case for the iPad Pro that might be worth waiting for. Offering a rugged rubber frame with a clear back and integrated touchscreen film, the Catalyst Case makes the iPad Pro completely waterproof. Specifically, it grants the iPad IP68 water resistance, which means you’ll be safe for up to 2m. 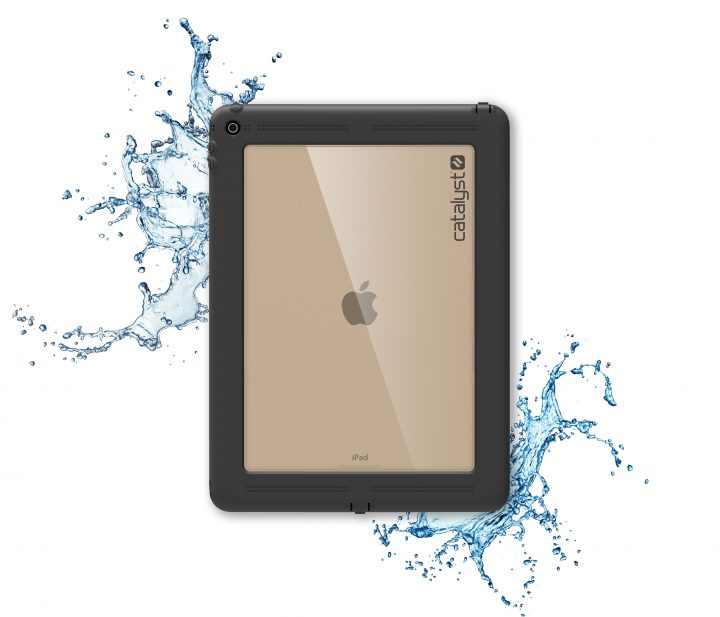 Rubber ports allow access to the headphone jack and lighting port on the top and bottom of the case, respectively, while Catalyst claims that its acoustic membranes allow for clear audio from the iPad Pro’s four speakers – all while maintaining the IP68 rating. Additionally, the case’s touchscreen film will allow for use of the Apple Pencil. Currently, there’s no word on pricing or shipping details for the Catalyst Case, but it’s likely to be both worthwhile – and expensive – when it finally ships.