Apple advertises the iPad Pro as, among other things, a laptop replacement. To do that users will need a good keyboard. We’ve got the Apple Smart Keyboard and the Logitech Create both for the 12.9-inch iPad Pro and we’ve tested them to find the best iPad Pro keyboard. The Apple Smart Keyboard also comes in a size that fits the 9.7-inch iPad Pro, but Logitech doesn’t yet make a version of the Logitech Create for the smaller device.

Here’s our head-to-head comparison. Watch the video below and read on to see all the details. Finally, at the end there’s a few other options for people who don’t want to spend over $100 for an iPad Pro keyboard.

This comparison covers the larger iPad Pro keyboards. While Logitech doesn’t make a version for the smaller 9.7-inch iPad Pro, Apple does. It’s not as wide so won’t offer as comfortable a typing experience as the larger version, especially for people with big hands. However, in every other way it works the same and look the same.

The iPad Pro deserves a good keyboard and we’ve got two options that integrate the special three-pin connector included in the iPad Pro. This means no Bluetooth pairing or recharging the keyboard. The keyboard gets power and sends keystrokes to the iPad through the connector.

Apple offers its own iPad Pro keyboard option.  Apple also partnered with Logitech to offer one at launch that Apple sells in Apple Stores. First, we’ll look at the iPad Pro Smart Keyboard ($169) which takes the traditional Apple Smart Cover and adds a keyboard to it. Before we get into how well it functions as a cover, let’s look at the keyboard qualities.

The Smart Keyboard cover is thin, but the keys still give enough feel to touch type quickly. The keys use the new keyboard technology that came on the new Apple Magic Keyboard and the new MacBook. It takes some getting used to, but after an hour of typing I loved using the keyboard.

The Logitech Create iPad Pro keyboard cover seems to be a higher quality keyboard since the keys feel like metal instead of the unusual textured material on the Apple Smart Keyboard. The Logitech comes with backlit keys, which I miss with Apple’s keyboard. It also includes a nice row of iPad/iOS shortcut keys across the top of the keyboard. 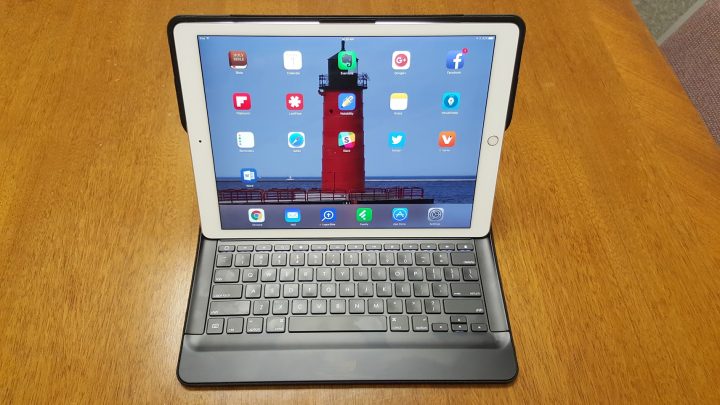 Unfortunately, the Logitech Create doesn’t feel as responsive. I had to type harder on it to get it to respond. It seems worse at the bottom edge of the keyboard than along the top.

The Logitech Create is thicker and heavier, but strangely, it’s not as stable to type on. The Apple Smart Cover feels very stable. Since the user doesn’t interact using a mouse but instead pokes the screen, it better stay standing. Also, put the two on a lap and the Apple Smart Cover iPad Pro keyboard doesn’t wobble as much as the Logitech Create. 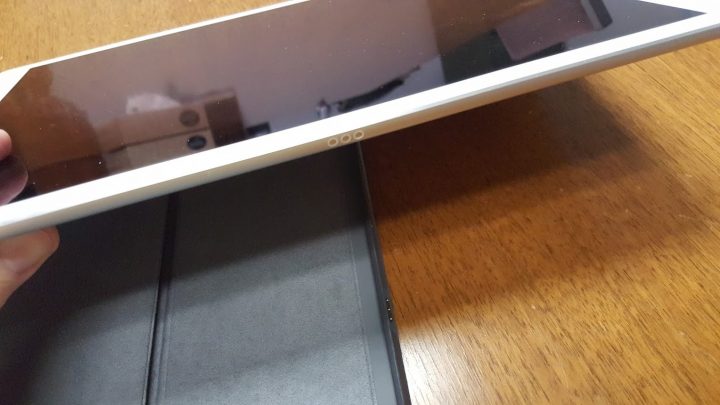 While the keyboard matters most, the case needs to work well as a case. The two keyboards connect using the three-pin connector on the left edge of the iPad Pro. They both protect the screen well. However, the Logitech Create also covers the back while the Apple Smart Keyboard doesn’t. The material on the outside of the Logitech Create feels textured while Apple’s external material feels smooth. It’s the same as the Apple Smart Covers used for other iPads. 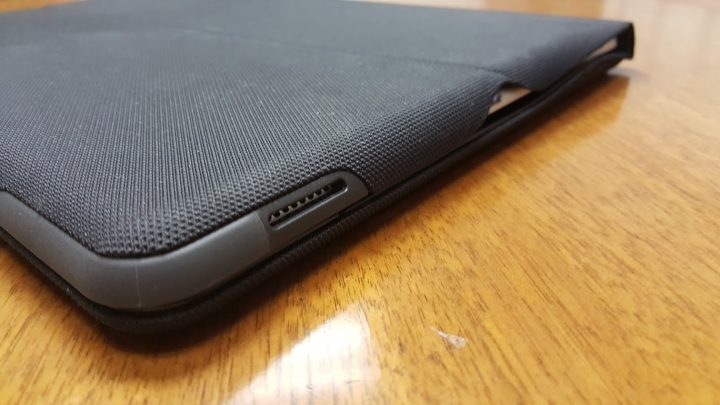 Apple wants to sell you a ridiculously expensive matching back cover for an extra $70 to keep the edges and back safe. This brings the total cost of the protection to $230. That’s insane.

The Logitech Create costs less than the Smart Cover alone. However, it’s thick and heavy. It feels like carrying around a 13-inch MacBook Pro. If I’m going to carry that much weight, I might as well carry around a MacBook Pro, which I can get for about the same price as an iPad Pro plus the Logitech Create.

Notice that the volume buttons popped off the Logitech Create.

The Logitech Create seemed more durable than the Apple Smart Cover, however the volume buttons that cover the iPad Pro volume buttons popped off. That could be an anomaly and I’m sure Logitech will replace it if I wanted. 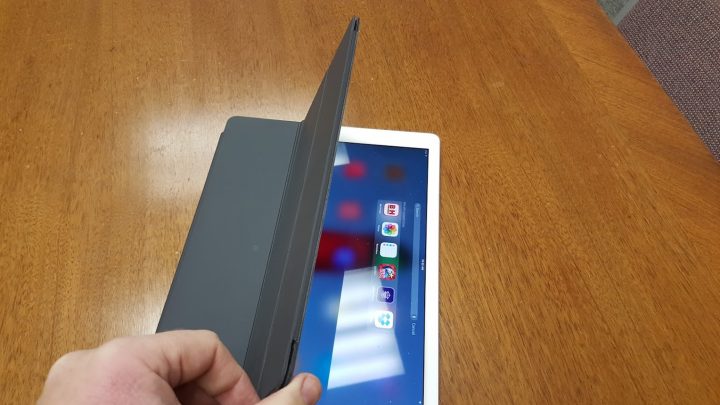 The thinner Apple Smart Keyboard gets the win even though its pricier.

Purely from a cost perspective, the Logitech Create costs less. However, mine didn’t hold up to just one week’s use before the volume buttons popped off. I also prefer thinner cases, so I’m willing to pay the extra $20 for the Apple Smart Keyboard cover. I plan to carry it in a bag most of the time, so protection isn’t as important. 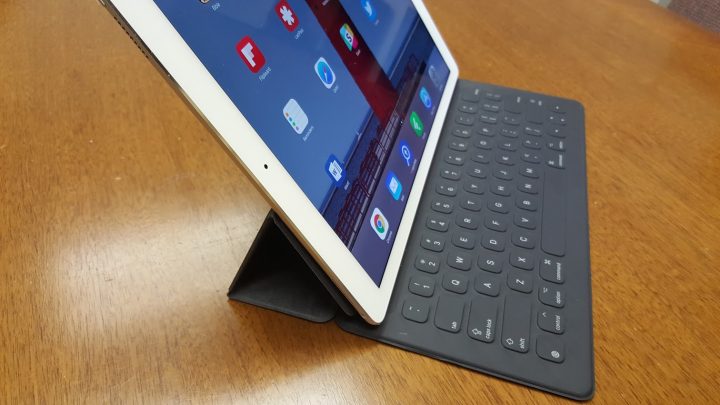 However, people who want something less expensive should look at Logitech’s solution or go with one of the alternatives mentioned below.

If you don’t want to spend over $100 for a keyboard, then consider some alternatives. It means carrying a keyboard that doesn’t integrate with the iPad Pro’s three-pin connector. You’ll need to pair the keyboard via Bluetooth, but you’ll save as much as $100 or more. You can also get a nice bag or case from WaterField Designs that includes a pocket for such accessories, like the great iPad Sleevecase.

First, try the new Apple Magic Keyboard. It’s only $99, includes the new key technology that Apple introduced in the new MacBook and comes in the Smart Cover.

If you don’t like the new key technology, look for the older Apple Wireless Keyboard. Amazon still sells it for less than $65.

Logitech fans can get the new Logitech Multi-Device Bluetooth Keyboard (K380) for only $40 on Amazon. It connects to up to 3 devices via Bluetooth.

In my video above I mentioned a couple of other Logitech keyboards no longer officially for sale. The Logitech K810 works great and connects to up to 3 devices. Use it with your Mac, iPad Pro and an iPhone while at your desk. You can also bring it along in a computer bag. It’s for sale for $74 at Amazon. 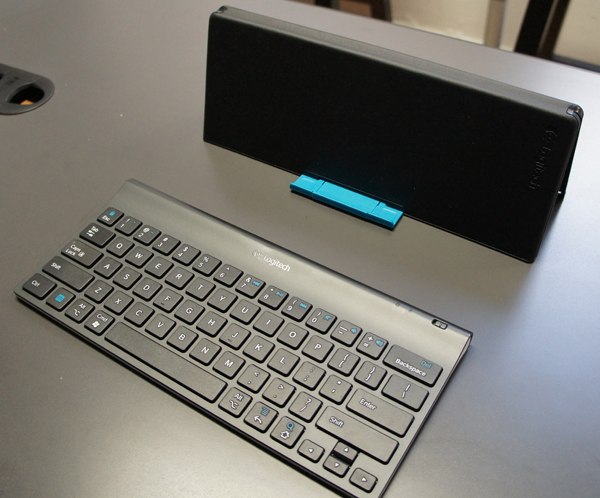 The Logitech Tablet Keyboard, which I love and wish they’d still offer, costs more than the $20-$30 I mentioned in the above video. It jumped in price since I bought mine a couple of weeks ago. It’s now over $40 on Amazon. I like it because it’s portable with its own carrying case that doubles as a tablet stand. It works great with the iPad Pro and is worth $40. This saves iPad Pro users at least $110 compared to the Logitech Create and $130 compared to the Apple Smart Keyboard.