Recent changes to the software powering your iPhone have made it easier for third-party browser developers (like Google and Google Chrome) to make a compelling alternative to the system’s native Safari. So in Safari vs Chrome, what’s the best iPhone browser? Let’s find out.

Third party browsers have been available on iOS for a long time, now. Ever since the App Store launched, developers have submitted their take on web browsers, often offering features that aren’t in Safari, or wouldn’t be for several years. A prime example is tabbed browsing; on the first iPad, Safari was little more than the iPhone browser blown up for a big screen; the lack of tabbed browsing was a huge oversight, and one that third party developers raced to fix. Opera brought its image compression (and thus bandwidth saving) algorithms to iOS, a move that Google copied last year with “Data Saver,” a Chrome feature that runs some traffic through Google’s servers to save on how much bandwidth you use (this is probably a terrible example, since Data Saver was removed in the most recent version of Chrome). 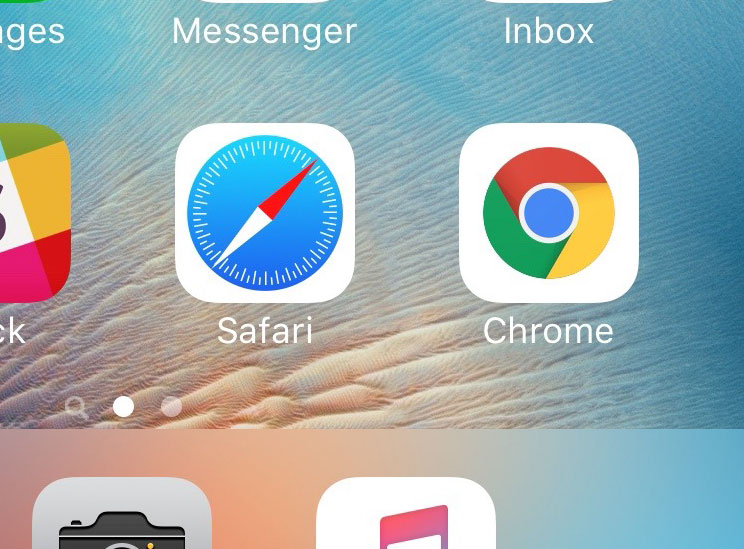 These days, Safari has absorbed many of the features found in third party offerings and become a really powerful app in its own right. As of iOS 9, Safari can perform tabbed browsing, syncing passwords, bookmarks and more with Safari on OS X, picking up open tabs from other devices (both other iOS devices running Safari as well as any Macs to which you’ve logged in with your iTunes password), etc.

Its biggest feature over the competition by far, however, was Apple’s Nitro javascript rendering engine. Safari has seen huge improvements in page loading speed, thanks in no small part to Nitro. Due to the way iOS is constructed, Apple has forced third party browser developers to use alternate, slower systems to render javascript (or, in English, to display large parts of modern webpages) instead of allowing them access to the best parts of Safari. As a result, no browser could compare to the speed and stability that Safari offered, and even those with a number of extra features, like Chrome, paled in comparison.

Those days, fortunately, are now over. Recently (well, in iOS 8), Apple made the decision to allow developers access to the engine that powers Safari, finally making the question “What is the best iPhone browser?” a toss-up – while just a few months ago the answer would have been an unequivocal Safari, that is no longer the case.

I’m not going to post a bunch of benchmarks comparing these two browsers, because they no longer tell a story. Along with the transition to the exact same systems used by Safari, Chrome has gained the same strengths – differences in benchmarks for various tests are within the margin of error; one browser never really beats the other. The same can be said for Chrome’s effect on battery life, it’s better now than ever, and similar to Safari’s. 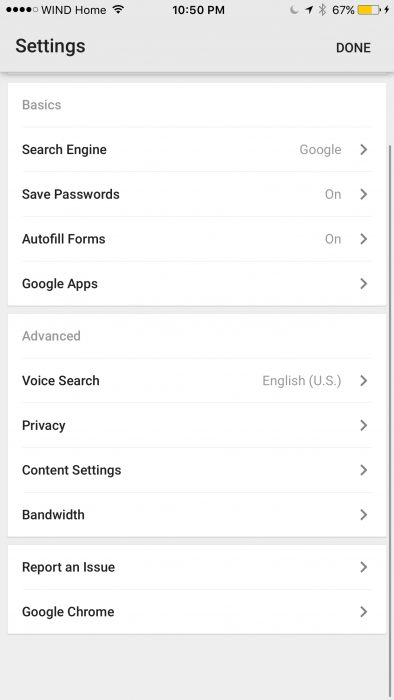 Chrome offers its own settings screen in the app itself, a departure for most iPhone apps.

The real differences, then, come in the form of user interface, layout, and features unrelated to how a webpage is displayed.

In terms of major changes to how the browser works, there aren’t many, but a major one is voice. Safari, naturally, relies on Siri to provide voice functionality; Chrome, however, uses Google’s own Google Now voice assistant. Both Google and Microsoft have tried to bring their digital assistants (Google with Google Now and Microsoft with Cortana) to iPhone, but most efforts end up floundering – iOS simply doesn’t offer the kind of low-level integration that would allow these services to tie into the phone on a basic level (integration that Android does offer, it should be pointed out).

Chrome is better at voice

Chrome, therefore, is a way for Google to add Google Now to the iPhone, and it works really well; it almost feels as natural as Siri. When you open Chrome, you’re presented with a clean page and a simple search box in the middle of the screen; it serves as both search box and address bar. Notice, however, a microphone icon is present; you can tap this and speak to use Google Now with your voice. Whenever you start typing, you’ll see a Google-fied Microphone sitting on top of the keyboard. Tap this at any time to switch to using voice search.

You’ll notice this sort of integration more and more as you explore Chrome. Voice is treated more like a first party means of interaction, which makes sense. It’s an “easy” way for Google to differentiate Chrome from Safari, and it leverages their substantial experience with voice, an area where many would say they still lead Apple. 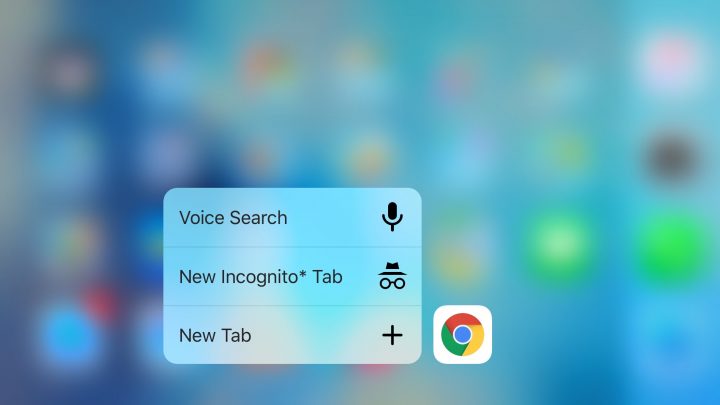 While Google can’t quite match the tight integration Siri has with iOS (e.g., hold down the Home button to use Siri from anywhere, even a locked phone), it does what it can. If you’ve got an iPhone 6s or iPhone 6s Plus, you can use 3D Touch on the Chrome icon and launch a voice search straight from the iPhone home screen. If you’ve already got your phone open, it’s about as fast as using Siri, which just goes to show that Apple has some work to do in this area.

The other area where Chrome is clearly superior is when using Google’s ecosystem of products. If you use Chrome on the desktop, you’ll be able to sign in to Chrome on your iPhone and instantly get access to all of your bookmarks, passwords, and browsing history.  Gmail users will be signed into their accounts at the same time, which is useful if you choose not to use one of the mail apps. Google will also preferentially launch Chrome instead of Safari if you click on a link in other Google apps. These include apps such as YouTube, Gmail, or the Google Search app, so it’s something to be aware of (it’s also one of the rare instances where you can get a non-Apple app the sort of “default” privileges you can give replacement apps on Android). You can set whether this happens on a per-Google-app basis. 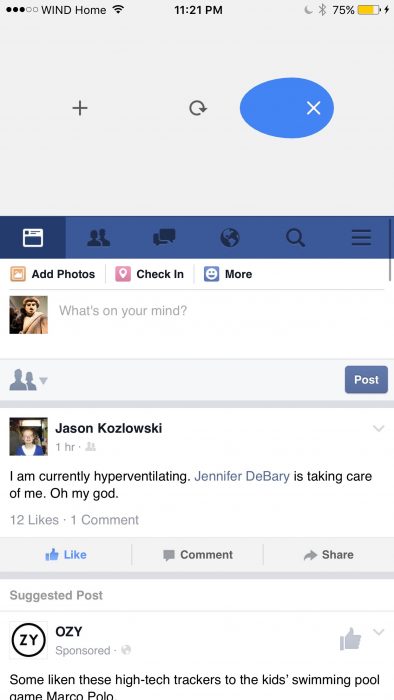 Another thing that Google has done better than Apple is one-handed operation. Especially useful on a phablet such as the iPhone 6s Plus, you can swipe and hold down on a page to reload it without having to reach up to the address bar like in Safari. When you pull down, you’ll notice three icons appear at the top; letting go reloads, but if you swipe to the left or right, you can open a new tab or close a tab, respectively. It works really well, though it’s absent on the iPad version.

Safari has a better interface

Both browsers offer a similar UI to what you might see on a desktop. Whether you prefer the general look and feel of one over the other is, in large part, down to personal preference. It’s hard to argue, however, that Safari just works better on larger screens like the 6s Plus (despite the note about one-handed use in the previous paragraph). This becomes apparent if you need to open more than a handful of tabs; on the iPhone, you can tilt to landscape and pinch out to see an overview of all your tabs on a single screen. With Chrome, however, you’re limited to going through each tab one-by-one until you find what you want. The difference is even more pronounced on the iPad, where Safari’s pinch-out gesture is extremely handy. 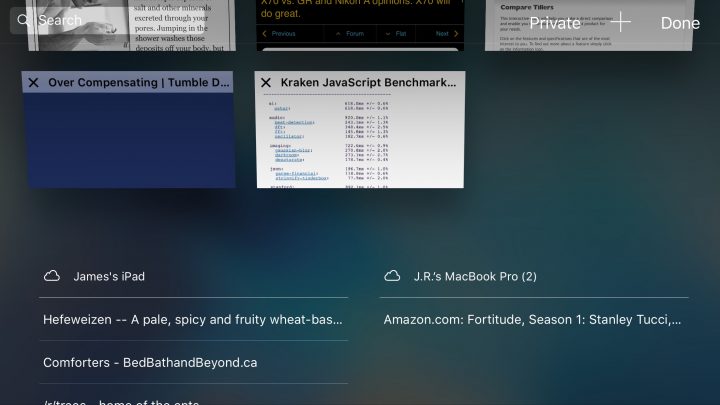 Additionally, Safari places many commonly used buttons (page left, page right, Share, Bookmarks, tab view) along the very bottom of the screen, where you can easily tap them with your thumb. On Chrome, they’re harder to get to or hidden in another menu.

Another plus to Safari comes in the form of the iPhone’s new content blockers – apps and filters that you can use to block some kinds of internet advertising, or other web content. For the moment, these sorts of features are only available if you’re using Safari; the part of iOS that Google uses to power Chrome can’t access them.

So what’s the best iPhone browser?

This is going to sound wishy-washy, but it depends on the other kinds of services and platforms you use. If your life revolves around Apple – you use Safari on your MacBook and iMac, and browse with an iPad on the couch – Safari is the right choice; it’s just better integrated to Apple’s services and iCloud. In addition, if you’re a heavy iPad user, it is clearly the better browser; it handles multiple tabs on the iPad in a much more intuitive and easy-to-browse manner. 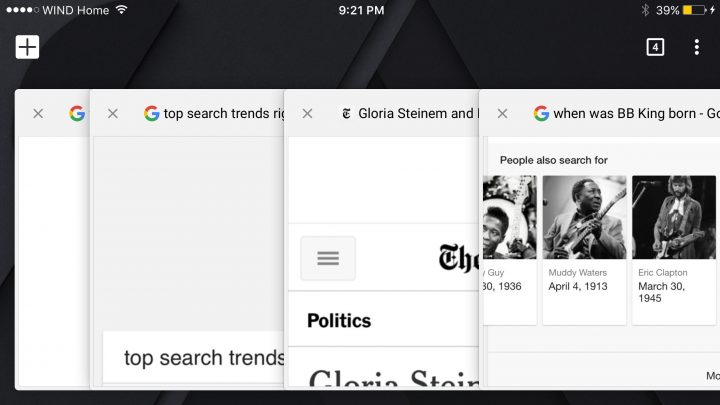 Going through tabs on Chrome is okay, but it isn’t as nice as the system in Safari’s landscape mode.

If you’re more of a sometimes Apple user, however – you use Chrome on the Mac (or more probably, on your Windows PC), and you have an iPhone but no iPad or maybe an Android tablet, Chrome is the better browser. It will sync your browsing history and account information between your various Chrome installations, just like Safari does on the Mac. It also uses a similar – and often superior – voice assistant to the one you might already be used to in the form of Google Now.

If you’re somewhere in between, it’s probably easier to stick to Safari. Unless you’re firmly in the Google ecosystem, moving your iPhone to Chrome doesn’t really get you anything you don’t already have (save for Google’s voice engine). Still, check out the free download in the App Store, and let us know in the comments which iPhone browser you prefer: Safari, or Chrome?