The new iPad jailbreak for iOS 5.1.1 is now available to the masses as part of the easy to use Absinthe 2.0.2 jailbreak tool.

With this jailbreak, nearly all the iPad models can be jailbroken.

Much of the information in our iPhone 4S jailbreak guide applies to the new iPad jailbreak and iPad 2 jailbreak, so I recommend starting there if you need to learn about the iPad 3rd gen jailbreak.

Many of these iPad jailbreak tweaks are free, but a few will cost as much as $10. Remember that when you purchase jailbreak apps, you cannot use them if you un-jailbreak, but you can re-install them when you re-jailbreak.

Quasar allows users to multitask on the iPad with resizable overlapping windows. This is the best way to view two apps at one time on the new iPad.

Quasar uses the home button and iOS multitasking gestures to control windows, and users control the size of windows much like in OS X.

This is a great looking app and one of the biggest reasons to jailbreak the new iPad, especially for users who want to work in two browser windows while working with an iPad keyboard case.

Instead of tapping on the text, swipe with one finger for precise cursor movement or two fingers to swipe faster. To select text, start a swipe from the shift key. This ingenious method of text selection is impressive and one we hope shows up in iOS 6, but until then it is one of the best free iPad jailbreak apps in Cydia. 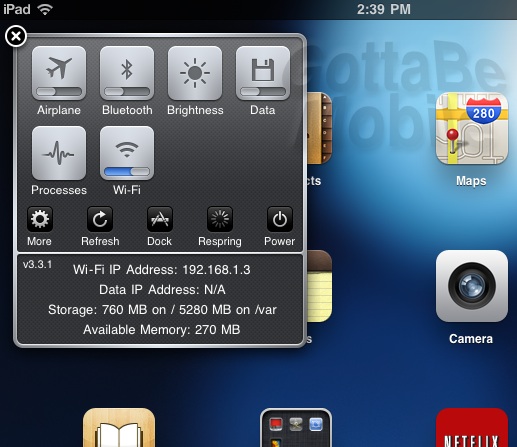 SBSettings makes it easy to change settings on the iPad.

SBSettings remains a favorite iPad jailbreak app because it offers fast access to settings with a simple swipe on the status bar.

Users who need to turn Bluetooth and WiFi on or off and switch brightness often will love this free iPad jailbreak app.

SBSettings is themeable and expandable with add-ons available in Cydia.

Dashboard X brings widgets to the iPad. These widgets allow users to put clocks, buttons, weather and much more live on the iPad home screen.

Dashboard X is $1.99 and includes the option to add additional widgets like DashTweet, a music widget and more. Users who look at Android widgets jealously will love this iPad jailbreak app.

Intelliscreen X looks amazing on the iPad, with many customizations to the Notification Center and lock screen.

IntelliscreenX is $10, but definitely worth it for users that want more out of the Notification Center and Lock Screen.

Activator a nearly infinite number of gestures and shortcuts to the iPad, making it easy to launch apps and more.

Activator allows users to set actions for a triple tap of the home button, a double tap on the status bar and more, so it’s easy to launch common apps.

Activator is a free jailbreak app for the iPad.

Dreamboard allows users to customize the look of the iPad in many ways. The Dreamboard iPad themes are available from a number of sources and offer a completely different look to the iPad.

From an OS X Lion theme to themes that make the iPad look like Android or just deliver an updated look there are plenty to go around.

Most themes still need updated to work with iOS 5.1.1, so it may be a few days or weeks until the best Dreamboard iPad themes are ready for the new iPad.

For less than a dollar Infinifolders allows users to add as many apps to the iPad folders as desired.

This is a great tweak for app addicts who love to organize apps in folders. Users who want more control over folders should check out FolderEnhancer for $3.

For $4 it’s easy to add a fully functioning file explorer, or Finder, to the iPad. This is a great app for applying tweaks to the new iPad and for accessing the file system.

iFile can open downloaded tweaks and themes for Dreamboard as well as access file and apps that can be sent to Dropbox and other sources. 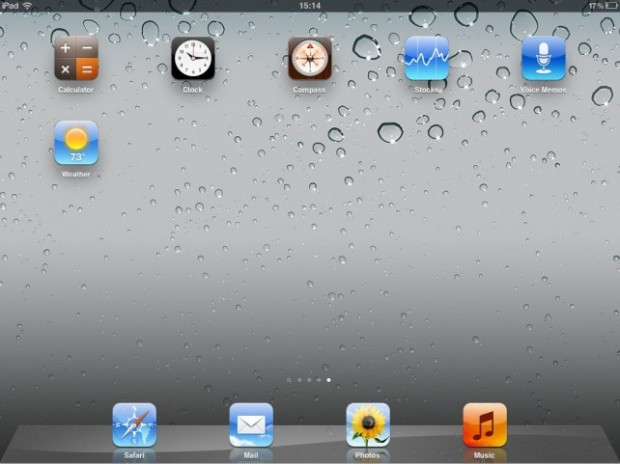 Add stock iPhone apps to the iPad with Belfry.

Apple leaves many of the basic iPhone apps off the iPad, so pick up Belfry to add them back.

Belfry puts the Weather, Compass, Calculator, Clock, Stocks and Voice Memos apps back on the iPad. These apps are iPhone versions, but it’s still nice to have them on board without buying a third party app from iTunes.

f.lux is a free iPad jailbreak app that is perfect for anyone who reads or uses the iPad late at night. The default brightness and warmth of the iPad disply looks great, but it can delay falling asleep.

With f.lux, the iPad will automaticlaly change the look fo the display to a less harsh color. This will make apps and videos look odd at times, but if you want to prevent a glarring harsh blue light wakeup when tapping on the iPad after midnight it’s the best option.