Microsoft is updating its Outlook.com app for Android users to provide some of the features previously exclusive to its website and Windows Mail experiences.

Detailed in a blog post this week, Microsoft says that the features it’s introducing to Android users are just the latest updates to come from the feedback it received from users since the app’s introduction in April.

In the updated application, Microsoft is taking a new approach to the way it handles email searching. While the original version of the application only allowed users to search email stored on their Android Device, the new Outlook.com for Android app also searches any messages stored on Outlook’s servers. This means that users don’t have to head to Outlook.com’s website if the email they are looking for arrived before the last few months. 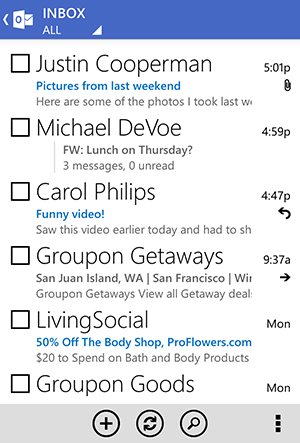 For those who prefer to not rely on the new server search functionality, the updated application also allows users to sync all of their messages to their device. This feature is especially useful for those who need their entire email allotment on their device. For example, many users save account service emails for years after they were initially sent.

Starting with this release, users can also create and activate vacation replies without heading to Outlook.com just like they can in Windows Phone 8. It’s even added the ability for users to choose the app’s theme color. Available colors include blue, pink, dark red, orange, light green, green, teal and light blue.

Outlook.com for Android now allows users to send and receive email through aliases, which are essentially dummy accounts with separate addresses that automatically sync to a user’s main account.

All told, the company says that the update application includes at least 150 improvements, though it didn’t bother to detail them all. Users can download the updated application from the Google Play Store now if their device hasn’t automatically updated already. Outlook.com for Android does require users to have a device running Android 2.2 an up.

As Outlook.com is natively supported in Apple’s iOS, iPhone users don’t have to download a separate application for users to get many of the features available in the Android and Windows Phone apps.