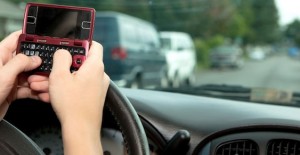 As a number of states have passed distracted driving laws to ban calling and/or texting while driving, a new study brings to light a new technological challenge that legislation may not have caught up with: apps and the age of the smartphone. A small study conducted at the University of Alambama Burmingham polled 100 smartphone owners and find that increasingly, many users are turning to apps while in the cockpit of their cars, concerning critics who bemoan that ‘app’ing while driving, or using apps while driving, may not be safe driving behavior.

The study didn’t make mention what types of apps were being used while behind the wheel and if using an app constituted actively navigating the app while navigating the car. For example, having an smartphone GPS app passively running and giving directions in the background may not be distracting, but actively inputting your destination address in the GPS app on your iPhone while trying to steer about an unfamiliar terrain is distracting.

Currently, there are no laws banning the use of apps while driving in the U.S., though 33 states have bans on using text messaging while driving. As technology evolves, though, legislation that is specific may become dated the moment it gets passed. For instance, does iMessage and BBM count as texting? Those are app-specific messaging applications, and with Facebook wall posts replacing email and SMS in some instances, can Facebook wall posts be treated like SMS? Surely the impact of sending a BBM or posting a tweet would be equally as dangerous as texting a BFF while driving a vehicle. However, broad legislation that prohibit or ban smartphone use by a driver of a car may not be productive as well as there are valuable smartphone GPS apps that when used properly can help make roads safer as drivers can focus on their driving rather than trying to focus on directions.