One word has been used by journalists to describe Apple’s last Macworld: dull.   Blogs such as Unpluggd featured polls for readers to chime in on what new products they expected from Apple.   An Apple netbook, a redesigned iPhone and an Apple Tablet appeared to lead the buzz.   The hype was huge, but the reality of no Steve Jobs and no significant new devices quickly snuffed high expectations.

Many sites featured articles outlining their hopes for new Apple products.   Dan Gillmor’s article at All Things D, outlined his case for the success of an Apple netbook, a low cost, subnotebook computer.   Gillmor believed his vision of an Apple netbook, a NewtBook, would be successful because of Apple’s easy to use OS X, touch-friendly interface, and implementation of an App Store similar to that on the iPhone/iTouch.   He believed that an Apple netbook would appeal to current iPhone/iTouch users that wanted a similar but more productive device.

Price: Apple’s products are designed very well, and consumers usually pay a little extra for that better design.   When talk of netbooks began, the goal was to produce a low cost, subnotebook that would cost around $200 USD or less.   An Apple netbook would inflate current costs and introduce high end netbooks similar to what we’re seeing with the Sony Viao P (called a netbook by some).   The main determinant in calling a device a netbook will soon no longer be the screen size, keyboard layout, or operating system. It will be the item’s cost.   I have a difficult time calling a device that costs more than $500 a netbook.

Community Interest: Just who is the target audience of the netbook market?   School aged children, first time computer and Internet users, and folks needing a mobile companion?   All of these individuals fall into the netbooks audience, but the driving force behind the netbook success are tech geeks like myself that want a fun, cheap, mobile device that won’t break the bank.   Netbooks don’t cost an arm and a leg to replace if they’re dropped, stolen, or bricked from experimenting with various operating systems.   Let’s be honest.   Whether it’s appropriate or not, the OSx86 project, MSIWind OSX86 and similar customized distrobutions of OS X for netbooks has sold more machines than Apple would like to admit.   It would be difficult for Apple to step into the netbook scene with an official Mac netbook when the MSI Wind is compatible with OS X out of the box and would cost a lot less.   Of course you’ll need to have above average computer knowledge or the ability to search Google and read what you find to make a Hackintosh.   The lack of an Apple netbook keeps the enthusiasts focused on current netbook models, rather than stealing them away to jailbreak an official Mac netbook.

Apple Control: If you’ve owned an iPhone or iPod Touch, you know what a hassle it can be to install a non-Apple approved application.   Apple’s App Store is the only officially supported way to install 3rd party software.   If an Apple netbook were introduced, it is highly likely that it would be bundled with an App Store similar to the iPhone/iTouch.   This strict, monopoloy control allows Apple to determine what applications are available for users to install.   This would stifle enthusiasts and only appeal to the novice. 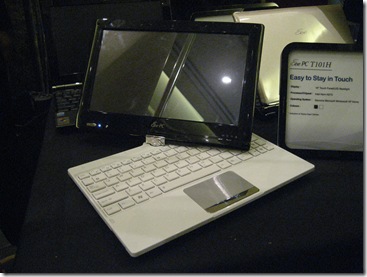 Current Netbooks Hit the Mark: There is room for improvement with current netbooks, but the models presented from Asus and HP are hitting the mark.   A functional keyboard, usable screen, and low cost are the netbook keystones.   As Kevin Tofel of jkOnTheRun points out, the Asus Eee PC 1000HA currently delivers the best bang for the buck.   With a 6 cell battery, the HP 1000 series and MSI Wind are equal or better competitors to the Asus Eee PC.   If high end features are needed, users will abandon netbooks for higher priced notebooks.   The Asus netbooks that have debuted at CES 2009 and feature Tablet functionality smash the netbook baseball out of the park.   Expect similar implementations as Windows 7 and multitouch continue to generate interest and grow in popularity.

What are your thoughts on the lack of an Apple netbook?