Apple’s eBay store for refurbished devices has a number of big discounts available this week according to a 9To5Mac report.

The eBay store doesn’t carry the Apple name, but it only sells Apple devices at prices similar to the company’s website. The upside to the eBay refurbished store is users only have to pay tax if they live in Texas, Nevada, New Jersey, Indiana, Washington D.C., or California and users can pay with PayPal.

Apple’s eBay store is great place to get less expensive Apple devices for the holidays. The standout deals include $179 for a 32GB iPod touch fourth generation. That’s $80 less than Apple charges for a new model, and $20 less than the same generation with 16GB instead. 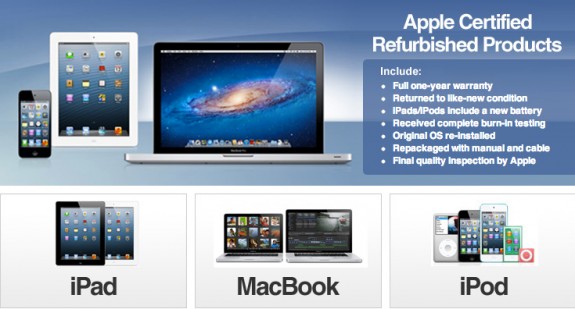 Apple also has good deals on the iPad third generation in the store. Users who want a Wi-Fi only model can get a 32GB model for just $469 through the refurbished eBay store. The model comes in either black or white. Apple also offers the 16GB iPad third generation Wi-Fi + Cellular for $509, and the 32GB model for $599. The store has both 4G LTE models in black and white for AT&T and Verizon.

Other discounts include the current generation Apple TV for $85, $15 less than a new model and $69 for an Airport Express.