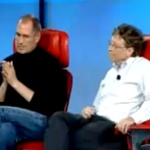 Gizmodo, I guess in need of attention, has horribly distorted the meaning of words spoken by Bill Gates and Steve Jobs at All Things Digital in 2007 on stage with Walt Mossberg with their headline, “Bill Gates Told Steve Jobs About the iPad in 2007.” Only problem is Gates was talking about the Tablet PC, which he already told us about in 2001.

From the beginning of this clip through the point where Gates actually gets to talk turkey, he’s clearly referring to the Tablet PC, including his customary mentions of voice and ink (talks Surface too). But does Gizmodo quote that? No, they gloss right over it, highlighting only the parts that could apply to the iPad. If this was Gates telling Jobs about the iPad in 2007, then I bought an iPad five years ago, a slate with more than 10-hour battery and 10″ 1024×768 display more than two years before Gates supposedly told Jobs about the iPad. Maybe Jobs learned about the iPad from my blog.

The great irony is that by removing the Tablet PC from Gates’ quote, Giz actually proves how far we are from the future he predicted. If we really were in the future Gates envisioned, people would know he was talking about the Tablet PC instead of hammering his words out of shape to fit the iPad.

Just as ridiculous is their claim that only Gates was looking beyond the PC. First, Jobs talked about an “explosion” of “post-PC devices” like the iPod, Zune, and iPhone. Obviously he was looking beyond the PC and the iPad is clearly part of that explosion of innovation he mentioned. Gates, on the other hand, was talking about the Tablet PC – which is still a PC.

Look, if people want to give Gates credit for inspiring Jobs to create the iPad, that’s cool… except when you retcon the Tablet PC out of existence to do it.