On a recent appearance with Jimmy Fallon to promote his philanthropic work, Microsoft Chairman Bill Gates was asked about not only the philanthropic work of the Bill and Melinda Gates Foundation, but also about his insights in to the tech world. Fallon asked Gates what his hunches were for the next big thing. Not surprisingly Gates talked about the fact that we’ll have more screens with devices listening and watching. When Fallon asked him which gadget he thought we would have seen more of by now, Gates responded in ways that only a Tablet PC lover could love.

Gates said he thought we’d see more people writing on Tablets using handwriting recognition at this point. He also offered that this was still to come and Fallon countered that digital ink on a screen just didn’t look right. Gates then acknowledged that most people who write, still do son on paper. But, sounding like the Tablet advocate of old, he said that people are hard at work on handwriting recognition and the appropriate form factor. Who knows what all of that means. 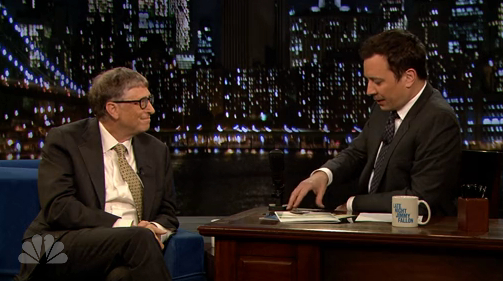 Regardless, it’s good to hear that, Bill. Here’s hoping it comes to be. It’s just a shame you couldn’t push this type of development further when you were in charge of things at Microsoft. But then that’s a story that could be written about so many of Microsoft’s innovations that slipped away and are being resurrected by others in different ways.

You can catch the entire Fallon episode in the video below and its worth watching to hear this talked about again. It’s also worth watching to see Fallon put away his MacBook Pro and other non-Microsoft devices in Gates’ presence. And, it is, in my view, always good to hear about Bill and Melinda Gates’ philanthropic efforts. Inventing new products may indeed change the world in some ways, but returning the dollars earned from those products back into solving the world’s problems is something we could all use more of.