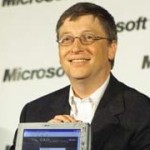 In an interview with a BNET blogger (via All Things Digital), Microsoft founder Bill Gates, when asked about the iPad, came out swinging in defense of his favored form factor.

“You know, I’m a big believer in touch and digital reading, but I still think that some mixture of voice, the pen and a real keyboard…”

Yeah! Voice! Pen! Keyboard! What’s that add up to?

“- in other words a netbook – will be the mainstream on that”

That’s right, the mainstream will be a Tabl… wait, what? A netbook? Aren’t those little notebooks that Microsoft used to think could operate fine running three apps at a time and no pen or touch support? Of the handful of models that offer tablet functionality, don’t they all have touchscreens without active pen digitizers? And since when is voice control commonly associated with netbooks? “In other words,” who puts voice, pen and keyboard together and comes up with “netbooks”?

I must not be reading this correctly. Here’s the full quote:

“You know, I’m a big believer in touch and digital reading, but I still think that some mixture of voice, the pen and a real keyboard – in other words a netbook – will be the mainstream on that,” he said. “So, it’s not like I sit there and feel the same way I did with iPhone where I say, ‘Oh my God, Microsoft didn’t aim high enough.’  It’s a nice reader, but there’s nothing on the iPad I look at and say, ‘Oh, I wish Microsoft had done it.'”

I agree with part of that. It’s not as if Microsoft didn’t aim high enough; they just didn’t hit the target. As for what I wish Microsoft had done compared to the iPad, a tablet-centric interface and Office app support are just two things that come to mind. Better developer support and promotion would also have been nice.

But the real insult, in case I wasn’t clear, is that Gates actually said “some mixture of voice, the pen and a real keyboard” adds up to a netbook. Yeah, maybe if you subtract out the voice and pen, but to me, that adds up to a Tablet PC. Sure, there are tablet-style netbooks, but by that logic, a Tablet PC is just a tablet-style notebook. And if netbooks are the future of the mainstream, that doesn’t look good for Microsoft either. Their netbook support has been, to put it lightly, lacking. Plenty there they should have done differently too.

Between this and Microsoft’s decision to finally end their Tablet PC blog, 2010 isn’t the year Microsoft lost tablet; it’s more like the year they washed their hands of it.