We’ve heard of biofuel as an alternative source of clean energy for cars and larger appliances, but now a similar concept may be used to power your phone in the future. There’s a twist, however, as the biofuel used in this prototype isn’t derived from plants, but rather from your own body. Researchers at the Bristol Robotics Laboratory in the U.K. have found a way to convert urine into energy. In this version of clean energy, your human waste could be recycled into energy to power your phone. 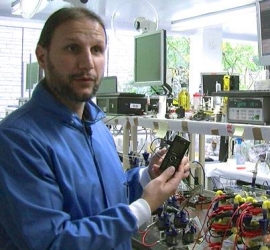 In a post on consumer blog CNET, the scientists are able to obtain enough energy to give a direct, albeit small, charge to a Samsung smartphone. The charge itself is potent enough for sending text, browsing the web, and making a short call. Right now, though, the energy that’s being derived from urine is still very limited, but the concept demonstrates the possibility for using what could be readily available organic matter when you run out of battery juice and aren’t anywhere near a wall outlet to plug in.

So how does this all work? Urine would need to flow through some fuel cells with microbes that would metabolize and process the organic matter into energy. The energy is collected inside a capacitor, and then transferred to the device.

It’s unclear what the cost of a mobile energy system like this will cost if and when commercialized. Readers interested in other forms of energy for their mobile gadgets should take a look at the Brookstone Fuel Cell Battery and the PowerTrekk unit that runs off of water.