If you’re in the market for some new Beats headphones, here’s what we can expect from retail stores as far as big deals go with the newly-acquired company that’s now owned by Apple.

Black Friday is right around the corner, and while we still have a couple of weeks left until you can finally take advantage of those hot deals, it’s never too early to start planning your shopping sprees.

Beats headphones are pretty expensive, and if you already have a few hundred dollars lying around burning a hole in your pocket, then you probably don’t want to spend full price on a pair of the Dr. Dre-endorsed ear cans, which isn’t too surprising, especially considering that you can get better-quality headphones for the same price or less.

However, if you’re adamant about getting a pair of Beats headphones, here are some Black Friday deals that you should be on the lookout for in a couple of weeks.

What We Already Know

It’s bit too early to know what all the major retail stores will have on sale on Black Friday, but a couple of big retail chains have already released their Black Friday ads, including Target and Best Buy. 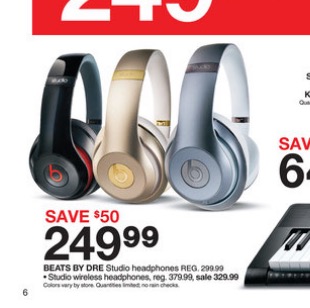 As for Best Buy, they’ll have a better deal on the Solo HD Drenched headphones, selling them for just $79, which is almost $10 less than Target will sell them for on Black Friday. Unfortunately, that seems to be the only Beats deal that Best Buy will offer.

What We Can Expect

With  the release of Target’s and Best Buy’s Black Friday deals, this gives us a better idea on what to expect when it comes to shopping for Beats headphones the day after Thanksgiving.

Unfortunately, we probably won’t see any huge deals on the popular headphones, especially from Apple. The Cupertino-based company that now owns Beats usually has a Black Friday sale of their own, but the discounts offered on that day have been historically disappointing compared to other retail stores.

This means that Apple itself probably won’t have that great of deals when it comes to Beats headphones.

However, other retail stores should be offering some comparable deals for Beats headphones, similar to what Target and Best Buy are offering, but we wouldn’t expect all models to be marked down significantly. We should expect to see the entry-level Solo HD Drenched headphones to be on sale across the board at many retail stores, with a couple of higher-end models getting a decent discount, but don’t expect anything mind-blowing.

Black Friday usually doesn’t focus on accessories when it comes to the biggest discounts. Bigger things like iPads, televisions, video games, etc. are the items that will see huge markdowns on Black Friday, where you’ll easily be able to get big HDTVs for just a few hundred dollars.

Over the next couple of weeks leading up to Black Friday, we’ll be posting about any new deals that roll in, and we’ll also have tips and tricks that you can use when it comes time to shop for that huge discount. Be sure to bookmark our Black Friday archive in order to follow all of our Black Friday coverage.