Black Friday is morphing rapidly into a mess of a ‘holiday’ that’s more trouble than it’s worth. Our advice is to shop online on Black Friday and to not be sucked into the madness at your local mall.

There are some people who just love adventure of camping out in freezing temperatures and treat Black Friday like some kind of sport. For those of you who have fond memories of Black Fridays past, just trust us when we tell you that Black Friday is devolving.

Here are 10 reasons why it’s a bad idea to shop for gadgets on Black Friday.

Retailers generally don’t offer rain-checks on Black Friday specials. In fact, a lot of stores will only have a handful of the most-discounted items. If what you want is on the front page of your favorite store’s Black Friday circular and you’re reading this from home, you’re already too late. Some Best Buy stores had long lines Wednesday afternoon, composed of people who are skipping Thanksgiving all together. They’re the ones that are going to score the 40″ HDTV for $169, not you.

Some shoppers have been in line since Tuesday.

2) Your Time and Sanity are Valuable

Everyone likes saving money, but squeezing every last dollar out of a purchase can cost you a lot of time and anguish. Everyone’s time is worth something, so if it costs you even an hour or two to get a Black Friday special in-store, you may already be losing compared to shopping at Amazon.com. If you’re investing an entire day to waiting in line or bouncing between stores, you’re likely behind even more.

Shopping on Black Friday is more stressful than any other day of the year.  It’s cold, often wet and the crowds are especially rude. A lot of retail employees are tired and stressed as well, which is understandable considering many of them work on both Thanksgiving and Black Friday. You’ll probably feel like a road rage victim…without a nice comfy car to protect you or a car stereo to drown out all the whiners.

In general, technology retailers offer the biggest discounts on sub-par merchandise so they can advertise unbelievable deals, such as $170 laptops and $140 HDTVs. There are some discounts on high-quality gear, such as Apple’s MacBooks and Amazon’s Kindles, but they aren’t as drastic as the deals that Best Buy and Walmart are promoting the most.  If you think the doorbusters are suspect, just wait until you see all the overstock and obsolete gear they’re clearing out on Black Friday.

Retailers don’t discount gadgets to ridiculously low prices out of the goodness of their hearts. They know that us consumers are a gullible bunch that are likely to spend more if they think they’re saving money. A lot of Black Friday shoppers plow all of the ‘savings’ into items they didn’t plan on buying. What’s the point in buying a $140 camera for half off if you’re going to sign up for a $30 service plan and get talked into buying a bag full of crappy accessories?

5) Black Friday is Creeping into Thanksgiving

Back in the old days, Black Friday used to start on Black Friday, with stores opening at 5am…at the earliest. Starting a few years ago, Walmart, Best Buy, Target and other major retailers started a pissing match to see who could open earlier and draw the biggest crowds. Apparently, midnight on Black Friday just isn’t good enough though. This year Walmart is opening at 8pm and Target is opening at 9pm…on Thanksgiving.

Now all those Walmart and Target employees setting up for Black Friday can’t just turn on their cash registers and throw open the doors at the advertised times. No, they need to clean up the place, stock up all the shelves and swap out Thanksgiving displays for Christmas displays. That means that a lot of stores aren’t going to actually shut down for Thanksgiving. A lot of people who work for pretty low wages are going to have to skip Thanksgiving all together.

At least the Walmart and Target employees are getting paid to skip Thanksgiving. A few years ago you could hop into Black Friday leans after you stuffed yourself and still have a reasonable shot at scoring the best Black Friday gadget deals.  But with stores opening earlier than ever, consumers are adjusting and simply lining up earlier. 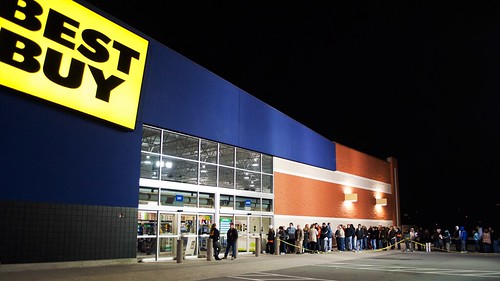 If you can’t afford an item on Thanksgiving, you probably won’t be able to afford it on Black Friday. A lot of Black Friday shoppers don’t have any business plunking down $1,024 on a new MacBook  on Black Friday or any other day of the year.Too many consumers treat the 10%-30% off sales as a license to blow cash they don’t have.

Retailers know this and use the opportunity to sign people up for store charge cards. Saving $175 on a shiny new computer might sound good, but it’s not such a bright idea if you’re going to end up spending that much on interest and other fees.

It’s a much better idea to wait until you can actually afford a gadget than to throw it on a high-interest credit card. Fortunately, that day might come sooner than you’d expect.  Retailers and online stores will continue to offer significant discounts throughout the holidays. If you want the biggest discounts, just bide your time and wait for the post-holiday sales.

Big ticket items like HDTVs will be on sale in January during the NFL playoffs. Just about every gadget you can buy on Black Friday will be obsolete come January, when just about every manufacturer unveils their 2013 wares at the Consumer Electronics Show in Las Vegas. We often see cameras, phones and other devices virtually given away once their younger siblings hit the market in the first and second quarter of the year. 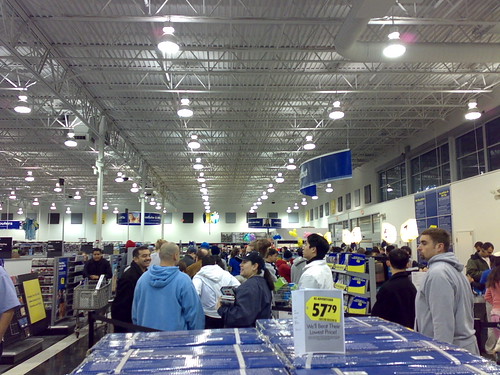 Customer service is sometimes great at electronic retailers. If you’re lucky, you’ll have an enthusiastic blue shirt patiently listen to your wants and needs, then match you up with a gadget that fits. He’ll even whisper to you that you really don’t need to buy the expensive accessories and that you can pick stuff up like HDMI cables online for a fraction of the price.

None of that’s going to happen on Black Friday. Retail employees just triage customers based on who’s whining the loudest. To make matters worse, a lot of workers this time of year are seasonal or part timers, which means they’re not as experienced or helpful as the regulars.

If you’re lucky enough to be gathered with family with Thanksgiving, savor every minute you can rather than rushing off to the mall to wait in line. You and your kids aren’t going to care much about the cheap gadgets you bought a decade from now. There are millions of Americans that would love to spend the four-day weekend with family. Think of all the police, firefighters and Walmart workers that would love to go out and throw the football around with the kids. Think of the deployed military members that are celebrating Thanksgiving weekend in tents, on ships or in Humvees. Do you think they’d rather have an extra slice of pie with the family or rush off to wait for a store to open?

10) Shouldn’t You Be Thankful?

Thanksgiving is a time to reflect on what you have, not on what you don’t have. Year after year we hear from readers that tell us what Black Friday deals they scored. It seems to us that most Black Friday shoppers after the doorbuster deals are shopping for themselves, not for gifts. The deals will be there for the rest of the holiday season and beyond. Out of town family members are flying home in a couple of days. You never know which one of your family members is spending their last holiday season with you. You only have a handful of four-day holidays before your kids move out of the house.