Amazon is offering the Kindle DX for just $259 today as part of its Black Friday promotion. The 9.7″ eReader usually sells for $379, sitting at the top of the Kindle heap in terms of size and price.

Amazon recently released a new series of Kindles that are more affordable, but the Kindle DX is the only one available with a display that’s the same size as iPad 2’s. This means fewer page turns and the ability to crank up font size without having to worry about having to flip pages too often. 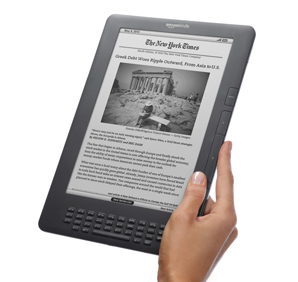 With this Black Friday discount, the Kindle DX is still more expensive than the Kindle Fire, the new Amazon device that has a color display and the ability to run Android applications. A lot of people will prefer the versatility of the Kindle Fire, but it has a much smaller display and lacks 3G. The Kindle DX comes with a free 3G connection, which means you can buy and download books from just about anywhere. The Kindle DX can also go much longer between charges and has a display that does a better job of mimicking paper and ink.

As with most technology, there are tradeoffs in every technology purchase. The Kindle DX has physical buttons for flipping pages that some people don’t like. If you don’t absolutely need the larger display, I recommend checking out the new Kindle Touch or Kindle Touch 3G, which cost as low as $99 and $139 respectively.