If you spent any time in the Black Ops 3 beta or even reading player reactions in forums, on Twitter and on Reddit, you’re well aware of the complaints about flinching, overpowered skills and missing features.

After we spent a lot of time playing the Black Ops 3 beta we came away hoping for some improvements and it looks like Treyarch delivered. While you cannot play through these changes to test for yourself if the Call of Duty: Black Ops 3 release is to your liking until November 6th, you can see if the studio addressed your biggest concerns. 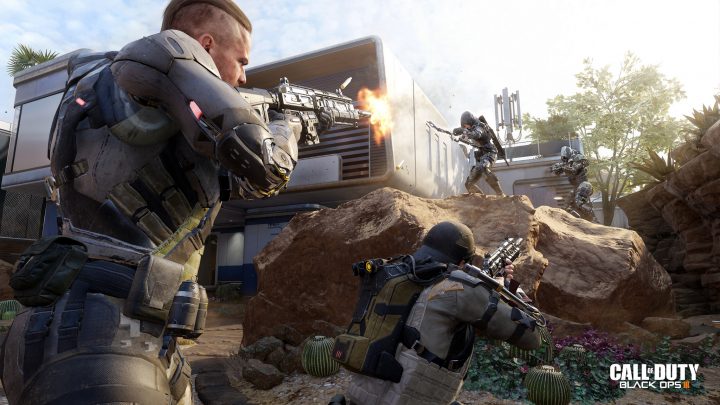 Here’s what’s changed from the Call of Duty: Black Ops 3 beta to the release.

The Call of Duty: Black Ops 3 release date is November 6th, and you can count on these changes from the beta being on your console or PC when you boot up on day one — which just so happens to be a Friday.

In each of the sections below you’ll see a complaint from users and you will see Vonderhaar’s outline of the changes that the team made to Call of Duty: Black Ops 3 from the beta to the final release.

“Some players were dissatisfied that the Black Hat equipment was too powerful. We agree. Our new hacking mechanic scales the hacking speed based on how close you are to the target, and will require precise aim to hack Scorestreaks in a reasonable time. Time-to-hack has been adjusted upwards across the board to make it more challenging to hack, especially at the higher end of rewards. Hackers now also appear as a red dot on the minimap for the duration of the hack, which, along with VO notifications that a Scorestreak is being hacked, provides players the ability to counter by hunting down the attacker.

Rejack sparked its fair share of controversy during the Beta for a number of reasons, most of which were valid. Included in that list: putting players into Rejack did not count as a kill, and players were using Rejack to stack Scorestreaks. Now, putting a player into Rejack counts as a kill. Players receive kill credit immediately in-game, on the scoreboard and leaderboard, and in persistent stats. Rejack now also resets all Scorestreak progress so that it cannot be used continuously throughout a match to pad progress towards high-level Scorestreaks.”

@DavidVonderhaar Litteraly Black Ops 3 is perfect the only thing I have a problem with is the flinch & the damage on Grenades :)

“We’ve talked a lot about the flinch mechanics during the beta — that’s when getting hit causes your weapon to move out of position. Our improved networking code would sometimes cause bullet flinch to stack, so we put a cap on how much you can flinch while ADS. While you will still flinch when shot, it will be within tighter constraints to keep you closer to your aim.

We improved the feedback that you have downed your target by including the red “kill marker.” This marker will subtly grow in size with each subsequent hit, turning red upon dealing lethal damage as added reinforcement to confirm the kill.”

@Treyarch please fix the throw distance of the frag grenades in black ops 3. I'm a grenade addict but they just feel terrible to throw. <3

“During the beta, any downward or backward player movement could make the grenade toss distances feel awkwardly short. This has been adjusted so that player velocity never negatively impacts grenade trajectory. We also tweaked grenade speed and distances.

I know one thing. I will not be playing Safeguard when black ops 3 comes out.

“By popular request, we’ve added a “Time in Hill” stat for the scoreboard and leaderboards in the Hardpoint game mode.

Players did not feel sufficiently rewarded for escorting the robot in Safeguard. Players now receive +25 score for every 3 seconds that they escort the robot toward the enemy base.”

“Players wanted additional details about how they were eliminated. The Kill Cam and Final Kill Cam now show what killed you (including weapons, Scorestreaks, Specialist weapons, equipment, etc.) and what perks the player has equipped.

Additionally, various weapon-balancing changes were implemented, including to the Razorback and M8A7.”

You can read more about the Call of Duty: Black Ops 3 release date and the release in the slides below including where you can buy the game at midnight and other details gamers need to know.