Images of the BlackBerry Dev Alpha C hardware were posted on BGR. 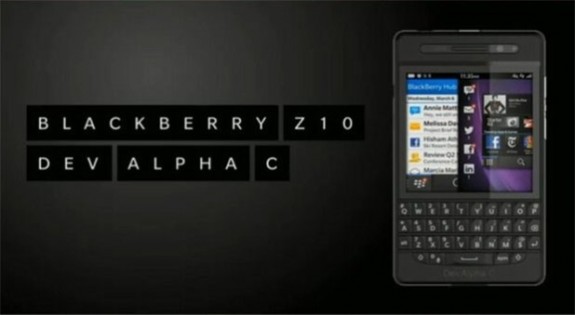 The keyboarded BlackBerry Q10 was announced alongside the BlackBerry Z10 though RIM isn’t making that handset available right away. The BlackBerry Q10 may not become available for purchase until April at the earliest and even possibly later depending on geographic location and carrier. Given that BlackBerry, formerly known as Research in Motion, is now beginning to seed the Dev Alpha C device, developers will have to work quickly to port their apps for the BlackBerry Z10 when that device becomes available.

Unlike the touchscreen-only BlackBerry Z10, the BlackBerry Q10’s design is similar to today’s BlackBerry Bold 9900 series smartphone. It has a 3.1-inch 720p HD display that sits just above the physical QWERTY keyboard. As such, apps that make use of the extra long screen real estate on the BlackBerry Z10 may need to be re-compiled for the smaller square screen user experience.

The Q10 will be made available to carriers 8 to 10 weekshttps://www.gottabemobile.com/2013/02/05/blackberry-q10-release-date/ after the launch of the BlackBerry Z10.