It has been awhile since we heard from RIM’s upcoming BlackBerry Bold 9790. Last time it leaked, it was in a shaky looking photo that was paired along with some specifications including a 1.2GHz processor, NFC support, 8GB of internal storage, and a 5 megapixel camera. It also features both a touchscreen and a physical QWERTY like the Bold 9930/9900.

Today though, we have a clear shot of RIM’s upcoming BlackBerry 7 device courtesy of TechCrunch and they give us a pretty good look at a phone that could be announced tomorrow at an event in Dubai alongside the BlackBerry Knight. (We doubt it.) 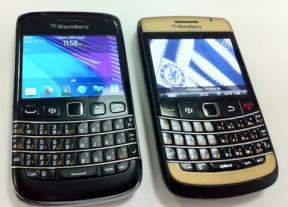 The Bold 9790 is the phone on the left and the guy who has it in his possession has described it as “lighter and slimmer” than the Bold 9700 which is very much a good thing.

Nothing yet on a release date, pricing or carriers but we suspect that we’ll have those sooner rather than later.

After all, RIM is working on getting out its first QNX (BBX) phone to market which means that the days of BlackBerry OS 7 are numbered.