The outages that have plagued many overseas BlackBerry users for the past three days hit North American customers this morning. As many as half of BlackBerry Users (around 35 million) are affected, with Twitter full of people complaining about lost or delayed emails and no access to messaging or the Internet.

This would be a major problem for Research in Motion at any time, but it’s particularly embarrassing right now, just two days from the official launch date for the iPhone 4S and a week from Blackberry DevCon Americas. Those free PlayBooks the company plans to give away won’t be so useful if Messenger is still down. 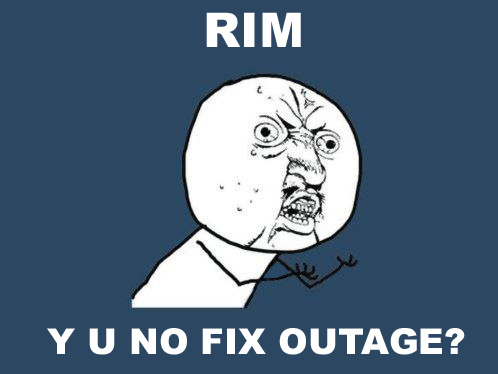 RIM made a statement on the outage this morning to CNBC: “BlackBerry subscribers in the Americas may be experiencing intermittent service delays this morning. We are working to resolve the situation as quickly as possible and we apologize to our customers for any inconvenience. We will provide a further update as soon as more information is available.” So far there’s still no word on a fix, so users are left waiting.

Just yesterday the company said that they’d restored service to customers in Europe, the Middle East, Africa and India, only to have to backtrack later when customers still struggled.

Naturally, BlackBerry users are frustrated and angry, with many calling for compensation. And what happens when 35 million people get angry? They take to Twitter.

“I love you #Blackberry – but if you continue to stop me BBM communicating with my sons, we’re so, like, OVER.” quipped CNN host Piers Morgan.

User Brandon Finley pointed out that “You never realize how many people tweet from their #Blackberry until their data network goes down and your timeline stops updating.”

Several tweets jokingly connecting the outage to a “moment of silence” for Steve Jobs are making their way across the net, as are tweets mentioning how the whole incident makes Blackberry look in comparison to iPhone and Android.

“My #blackberry is so secure even I can’t read my emails. Beat that iPhone.”

Joking aside, this outage is a major fail on RIM’s part and affecting businesses as well as the average consumer. Thousands of corporations and governments rely on BlackBerry and the secure Messenger service for communication. President Obama famously fought to keep his BlackBerry so he could communicate with his family.

That this outage has lasted three days and affects not only BBM but also the ability for BlackBerry phones to simply browse the Internet has many disturbing implications. Especially since this isn’t the first this has happened in recent memory. Back in March of last year an international outage lasted for over 24 hours. And, as the folks at Crackberry point out, these outages happen occasionally, though not usually for this long.

But if this is a normal thing for BlackBerry owners to experience, is the solution really to relax and just get used to it?

“Common [sic] #BlackBerry don’t fail me now! So many important things to do today,” begs tweeter Peter Skingle under the hashtag #BBMFrustration. I think that answers the question…