The Research in Motion BlackBerry PlayBook, the first BlackBerry tablet, has arrived at the FCC and is awaiting regulatory approval for sales and use in the U.S. further suggesting that the slate is closer to launch. RIM has requested approval for three different WiFi models of the PlayBook–each model differs in the amount of on-board storage, ranging from 16, 32, to 64 GB, matching the storage capacities on Apple’s iPad. 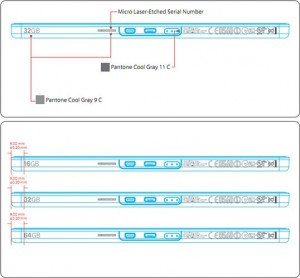 The PlayBook will launch with the BlackBerry Tablet OS, which is powered by the QNX system found on car infotainment systems like the BMW iDrive. The device will be RIM’s first attempt at a tablet. The device, like the TouchPad from HP, the iPad 2, and the Motorola Xoom, will sport a dual-c0re processor. It was rumored that because of problems with an initial Marvell CPU, RIM was later forced to rely on Texas Instruments to provide the processing power for the PlayBook, which had delayed the device’s launch.

The PlayBook is expected to launch on April 10th. RIM’s strategy with the PlayBook initially is to launch sans mobile broadband support so at the initial launch, there will only be WiFi-only models available. The good thing about this strategy is that RIM can get the PlayBook into consumers’ hands sooner as the device won’t need to go through the lengthy process of carrier certification. The bad thing is that the PlayBook will, if you’re using the tablet for emails, be dependent on connecting the tablet to a BlackBerry smartphone to view the phone’s emails on the tablet screen; there isn’t a native email client on the PlayBook.

RIM says that a 4G WiMax of the PlayBook is coming later this summer to Sprint. The company is also planning on a 3G and 4G model of the PlayBook, though specific plans so far for those models have not been disclosed.