Just as we predicted, Research In Motion has released BlackBerry OS 2.0 and it is available to download right to your PlayBook.

BlackBerryPlaybook OS 2.0 brings a number of features including enhanced email and calendar functionality as well as the ability to run select Android apps that have been submitted to the BlackBerry App World. 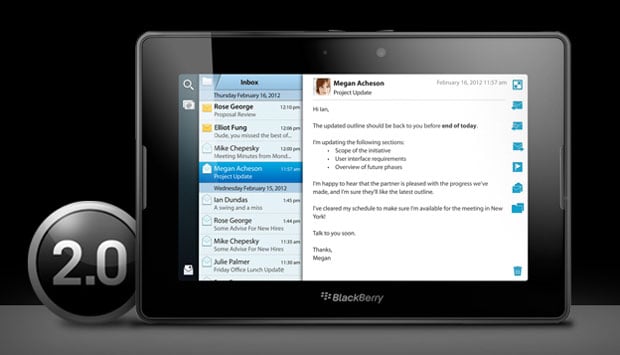 As much as RIM wanted to claim that the PlayBook didn’t need integrated email and other apps, they have caved. Along with a number of other features, RIM has included a number of much-needed updates and features.

Finally, you can reach your email, calendar and contacts on the PlayBook without the need for a bridge or the web browser. RIM is pushing the unified inbox and People View of your calendar, which shows you who is on your calendar. You can also link your contacts up to Facebook, Twitter and LinkedIn.

The video above shows you how the new email system and communication tools in BlackBerry PlayBook OS 2.0 work.

The new version of BlackBerry Bridge allows you to use your BlackBerry Smartphone as a remote control for your PlayBook. You can see how this works in the video above.

Open On for Blackberry

Another feature is the ability to open documents like PowerPoint, Word and PDF right on the PlayBook with a single click.

How to Update to BlackBerry PlayBook OS 2.0

You should see a notification to update your PlayBook the next time you turn it on. If you see this notification, tap “Update” to start installing the new software.

To manually update to BlackBerry PlayBook OS 2.0, follow these steps.

Make sure your PlayBook is plugged in or has at least a 20% charge before updating. The PlayBook may restart during the upgrade process.