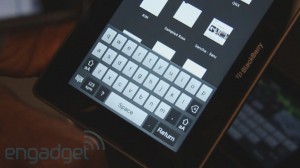 At a BlackBerry event in San Francisco, Engadget had spent some time with the BlackBerry PlayBook where Research in Motion (RIM) is demoing some new features of the device that the company had not talked about at CES or prior.

Among the new features is an attractive portrait-oriented software keyboard, which like the Galaxy Tab, would allow users to reach and thumb with two fingers while holding the 7-inch slate.

Additionally, it looks like touch may extend beyond the device’s 7-inch touchscreen and into the hardware bezel. The feature was talked about, but not demoed as it was not ready yet. There is speculation that The Astonishing Tribe (TAT), a software UI design group that was responsible for helping Google develop Android’s first UI and also the concept Fuze phone with Synaptics, may be silently working behind the scenes with RIM to assist its parent company implement the feature; RIM had acquired TAT.

The device is said to last a full day on a single charge. There’s also a cavity in the device for potential hardware updates. Unfortunately, that cavity isn’t user-accessible so you can’t just go out and buy an SSD or some other hardware peripheral accessory and add it to the tablt at will. It looks like the cavity may be designed for factory-level enhancements–perhaps like adding a 4G module at the request of a carrier or implementing NFC capabilities at the point of manufacturing should a carrier request for that feature.

The PlayBook will use RIM’s BlackBerry Tablet OS, which is powered by QNX. QNX is known for their enterprise-level work and their collaboration with car manufacturers. The QNX staff was on-hand at CES to show their work to design BMW’s iDrive car system.

Moreover, while the device is said to be running the Tablet OS, it looks like RIM still hasn’t disclosed if the company has plans to enable Android apps on the device like a previous rumor we had heard. The company will allow developers to create tablet-smartphone cross-compatible apps with a new SDK.