BlackBerry Q10 On Track for May Launch On T-Mobile USA

It looks like the keyboarded BlackBerry Q10 smartphone will be launching on T-Mobile’s U.S. 4G network sometime this may according to a carrier representative. Speaking to N4BB, the nation’s fourth largest carrier gave a May timeline, but no specific date for availability. Still, the May launch date would match up with what BlackBerry had stated before regarding the Q10’s launch. 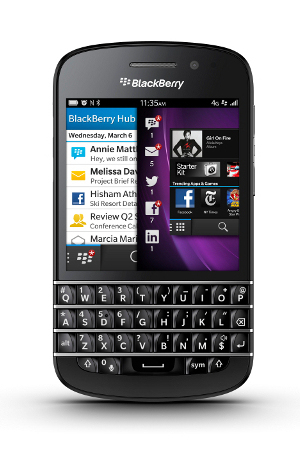 In addition to the BlackBerry 10-powered BlackBerry Q10, T-Mobile is rumored to be launching the BlackBerry Z10 on March 27. The Z10 will offer a full touchscreen experience while the BlackBerry Q10 will have a 3.1-inch square aspect ratio 720p HD Super AMOLED display and a hardware physical QWERTY keyboard just below the screen similar to that on the BlackBerry Bold 9900 series. Both devices will be powered by a Snapdragon S4 Plus dual-core CPU with 16 GB of storage and 2 GB RAM. Both smartphones will feature LTE connectivity, an 8-megapixel camera, and removable memory card slot.

We’ll have to wait for T-Mobile’s formal announcement to know when in May the Q10 will launch exactly.