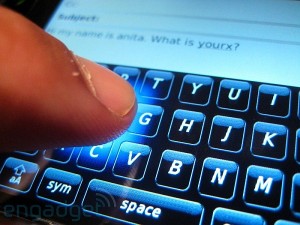 Rumors of a BlackBerry Storm 3 have been on-again, off-again as the future of the Storm franchise, at least in the U.S. under the helm of carrier Verizon Wireless, has been uncertain. The latest Storm 3 rumor has it that the 3.6-inch AMOLED Storm 3 will get some updated specs bringing it on-par with many modern smartphones, and will also bring with it a new BlackBerry 7 operating system, which will be powered by QNX, the operating system that will debut on the BlackBerry Playbook, Research in Motion’s 7-inch slate that’s heavily geared for productivity and multimedia.

If true, this will help BlackBerry become more competitive against other consumer-centric competitors, like iOS, Android, Windows Phone 7, and webOS while still maintaining an advantage with its enterprise-customers in terms of emails, secure environment, and ease of use.

Research in Motion was caught off-guard by the iPhone and multitouch when the original iPhone debuted. Since then, it had partnered with U.S. carrier Verizon Wireless and foreign carrier Vodafone in delivering the original Storm, a device that was meant to compete with the iPhone but received negative reviews by mainstream media due to its conflicting nature of touchscreen utilization on a primarily non-touch-based operating system. Since then, with the debut of the BlackBerry Torch 9800 on U.S. carrier AT&T and the BlackBerry 6 operating system, Research in Motion had made the OS more touch-based and adopted Webkit as an underlying framework for the OS and for its browser.

Unfortunately, though, BlackBerry 6 wasn’t radical enough for many users and its reviews were mixed. A lot of reviewers, myself included for a different site prior to joining the GottaBeMobile team, have stated that it’s the best BlackBerry to date, but still not competitive with other OSes. With the rumored Storm 3, BlackBerry 7 OS powered by QNX, RIM will have a fighting chance against its competitors. Given the hype, hope, and anticipation behind the BlackBerry Playbook, QNX may be RIM’s secret weapon to regaining its smartphone dominance.

Other rumored and anticipated specs behind the Storm 3 include 512 or 1 GB RAM and 1 GB of ROM. The device may have a 1 GHz CPU, and a 5-megapixel or 8-megapixel camera with dual LED flash and up to 8 hours of talk time. Hopefully, RIM will be able to pack in a 720p HD-capable video camera on the Storm–thus far, RIM has only included VGA-capable cameras on its smartphones.