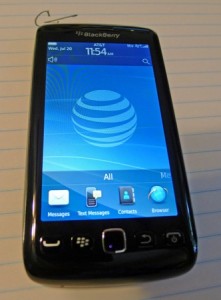 Research in Motion may be building itself a quiet ‘Storm’ as it moves its Verizon-branded BlackBerry Storm franchise to a more carrier-agnostic edition of the touchscreen slate BlackBerry Torch 9860 smartphone. The Torch 9860 is most recently seen with an AT&T-branded wallpaper, though AT&T branding isn’t found on the hardware. Given that AT&T has a strong relationship with BlackBerry-maker RIM, and the device will support 3G on the carrier’s network, the Torch 9860 could very well join the Torch slider on AT&T’s GSM network.

In addition to AT&T, T-Mobile is said to also be getting this device as well for its HSPA+ network as early as this week.

Unlike the Torch that was released earlier for AT&T, this one isn’t a slider and will be a touchscreen-only, slate-styled smartphone running the latest BlackBerry 7 operating system.

It’s unclear if a CDMA version of the Toch 9860 will make to Verizon Wireless with the current Torch branding or with a Storm branding.

Via: IntoMobile via Engadget